You gotta love Miami! I get in and out of there as fast as I can when I am dispatched down there.

Been there too Donna.... This is her location...

This is where I was.... And if you look it is and oval driveway....but 2 ways. I took a video that I need to upload cause it is pure chaos as all different trucks are coming and going in both directions and blocking each other. 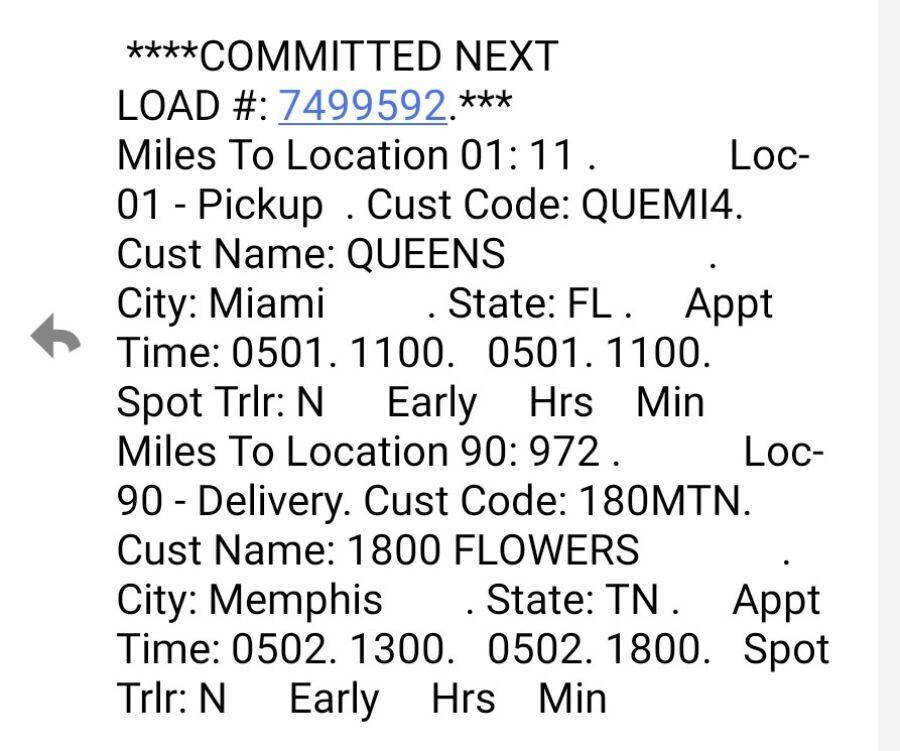 That customer is not a driver unload That is the one I was at with the circular drive. Be sure to go.in to the left so you can site side the dock. The yard dog may have you drop the trailer and put it in himself.

That customer is not a driver unload That is the one I was at with the circular drive. Be sure to go.in to the left so you can site side the dock. The yard dog may have you drop the trailer and put it in himself.

Thanks, Kearsey. You're the best!!!

I've done three flower loads, one in training and then I've done two with my wife. If you pull up my truck in the system a message pops up everytime "per doctors orders flower allergy" or some such...we don't do them anymore.

All three were multiple stop driver unload. Trailer loaded floor to ceiling, front to back. One trailer some of the flowers were palletized, the other two no such luck. Felt like I was going to die by the end of each load, although we got several comments that we were much quicker than most Prime drivers, ha. I don't remember using load locks at all, not sure how you would as there are like 50 different sized boxes (gladiolus are the worst).

The physicality of these loads is a challenge, but the schedule of driving and unloading is I feel far more dangerous. The one I was in training for I was so tired behind the wheel I was hallucinating. It was like a 48 hour run with something like 13 stops. Both drivers up to unload, and it's hard to sleep when you are sweating your balls off. By the time I started nodding off, bam, another stop. Then it's my turn to drive. I almost got into a wreck and that adrenaline kept me up for the rest of the run.

The last one with my wife we were both exhausted by the end, started making mistakes. I ran over my foot with a loaded pallet jack. We were both beat to hell. I remember messaging dispatch when we got the load "I thought we were friends...".

I am in the middle of a proper flower load (6 stops) right now. Full trailer. Front to back/floor to ceiling. I got up to help my trainee do our first two stops in Birmingham during my "sleeper berth" time. After the second stop he was out of hours. There is no way I'm going to have him unloading a truck while he should be sleeping. So I decided to do the next 2 stops by myself. Yes. We are behind schedule. No. I dont give a bleep!🤣

I guarantee there will be no positive comments about how quickly I unloaded these stops.

The one I just finished, I had to carry each box to the tail of the trailer. Then I had to jump off and load them onto a cart (the cart held about 20 boxes). Then I had to wheel the cart into the cooler and stack the boxes on the floor. *repeat* It took 6 trips.

I'm currently sitting in the street outside my next stop in Memphis. It is pouring rain. I will start unloading here when it stops. Then it is onto Springfield, MO for our last 2 stops.

I feel for u! My fm sent me the ppl with the floral, I sent back never done a floral, but u know I’m to old to be unloading flowers! He said oh I won’t put u on one with multi stops! I’d play any card to get out that mess!

The primary person a driver communicates with at his/her company. A dispatcher can play many roles, depending on the company's structure. Dispatchers may assign freight, file requests for home time, relay messages between the driver and management, inform customer service of any delays, change appointment times, and report information to the load planners.
Matt M.'s Comment

Wife said the message on the live loaded call last night said no more driver unloads on flower loads at Prime. It also said there may be some "kinks" as that gets worked out, but hurrah anyway for drivers.

Man those were some miserable loads. Definitely a young man's game.

Wife said the message on the live loaded call last night said no more driver unloads on flower loads at Prime. It also said there may be some "kinks" as that gets worked out, but hurrah anyway for drivers.

Man those were some miserable loads. Definitely a young man's game.

Hallelujah! I've seen some chatter about that recently. I hadn't heard it while waiting on hold during a call. I'm glad it has been confirmed. Thanks for sharing this wonderful news, Matt.

Prime Inc Advice For New Truck Drivers Dealing With The Boss Driver Responsibilities Refrigerated Truck Driving Stories
Click on any of the buttons above to view topics with that tag, or you can view a list of all forum tags here.