A Big Thank You 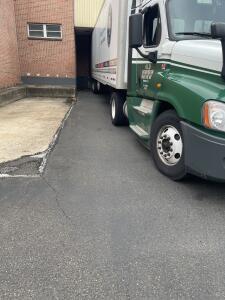 After lurking on this site literally since late 2011, this morning as My alarm went off and I did my normal snooze button and surf the internet before I get out of bed, I guess I just decided it was time to join the ranks.

Quick back story, I’ve been in the mortgage world all of my adult life. Have always wanted to drive trucks my entire life but just couldnt pull the trigger and walk away from the money I was making as a manager for the largest non-bank mortgage servicer in the county. Paychecks were great, but I was miserable. Its funny as a person who loves money and is motivated by money, I use to scoff at people in disbelief when they would make statements about being miserable at work when I knew what they made. Impossible to be miserable when u make that much. I quickly realized once I was in that spot how that actually felt. I was in charge of several departments and lliked all the people and my direct VP but I was simply miserable. Called out twice a month. Just didnt like what I was doing which made getting up every morning harder and harder. In Begining of 2021 I finally made the move. Finally left my cubicle.

I have literally read 90% of everything ever posted on here since 2011. has been a daily check for me for new posts to the point where I feel like I know alot of you personally simply by reading your posts so often. So this site was vital in my decade long research about driving trucks and my ultimate career change and all I can say is thank you.

Although I looked at several forums, I always felt this one was the best. and thats not blowing smoke. Just the caliber of people who were part of this family has always been far superior to the others.

Anyway, I ended up leaving my career in corporate mortgage management, relocated my fiance and almost 3yr old daughter from FL back to our home state in NJ and am currently a P&D driver with Old Dominion and have never been happier.

All my mortgage friends find it hysterical i left my 6 figure cushy cubicle and I drive trucks and they simply don’t understand. Me, I have Never looked forward to going to work as much as I do literally everyday. i havent called out of worked or took a day off in 7 months and thats unheard of for me. I never say never, however it doesn’t appear I will ever go back to a cubicle. My new motorized cubicle is way better in every aspect.

So thats the quick down and dirty story. I really thank every contributing member on this forum. This site has been instrumental in my research and just a blast to read and keep up with evryone while I felt like the creepy guy in the shadows. I was lurking back when old school was finally getting started with western express after several medical setbacks, when guy hodges and his brother were running team on the jit fleet for werner, Daniel B was with central, etc.

Thank you guys and gals for everything you do. You never know who is lurking in the background and what value they are gaining from just general genuine conversation amongst strangers. It’s really wlld!

I left NY for FL and ended up in Ohio, haha!!

Now, PONY UP some contributions, LoL !

I left nj when I was 18 in 2009. I moved back this year. Love Florida but its a dead zone so to speak in terms of freight in general, especially wpb where I was and few companies hiring local with no exp, at least at the time there were few. I figured getting a local job out the gate was impossible so if I had to be on the road initially, I rather my fiance and daughter be down the street from her mother in nj rather than 1k miles away if anything happened. Plus I figured i’d get a job within an hour of graduating cdl school being in the northeast. That was the logic behind it. Miss FL dearly

Good to see another OD driver here. I've been here 4 years and hope to make it another 33 years till I can retire.

I'm guessing you are out of JCY?

Good to see another OD driver here. I've been here 4 years and hope to make it another 33 years till I can retire.

I'm guessing you are out of JCY?

PHL….just over the bridge from Philly in Pennsauken NJ. Love it here

Dude if you remember Guy Hodges or even me with Central then you are a serious old timer like myself. I believe im either #2 or #3 longest tenured member here and that would definitely put you top 5.

You are definitely in the Old Timers club. It's great to hear you are enjoying your trucking career.

Dude if you remember Guy Hodges or even me with Central then you are a serious old timer like myself. I believe im either #2 or #3 longest tenured member here and that would definitely put you top 5.

Yes sir, flies for sure. I think you went to prime after maybe? Then fuel hauling with the straight tank and trailer/ doubles type combo? Digging deep in the memory banks lol. Glad the site is still thriving and glad to have signed up.

You are definitely in the Old Timers club. It's great to hear you are enjoying your trucking career.

Appreciate it. You, sir, are one of the people I looked for posts from more than most over the last 10 years. Your attitude, the clear time and effort that went into your posts and responses to people. The well written outstanding advice that people can utilize in everyday life even outside of this industry. Thanks for what you do.