I love this thread and the pictures of smiling faces!!!

Robert B. (The Dragon) yes, I breathe fire and other sideshow tricks
Indianapolis, IN
Experienced Driver
Posts: 1952
Joined Us:
5 years, 5 months ago
98 Photos

I love this thread and the pictures of smiling faces!!!

This thread is one of the reasons I chose this profession. Yes there's stress, yes people can suck at times but at the end of the day, it's the memories that can be made making it all worthwhile.

Thanks for sharing this old school. I didnt know knight had a flatbed division, your insights are great in planning your trips and days as well as the why. i have already learned a few things to think about .

Old School, I am really enjoying the adventure, you are are being truly blessed with memories you both will remember for many years. It's a little late for me to have that bonding experience with my children 25 and 27, hopefully I may experience this when they produce grandchildren. Until than I hope you don't mind if I share yours right now. Safe travels you have the most fragile cargo aboard your rig right now.

We are sleeping in Cedar Falls, Iowa tonight as we make our way into Cedar Rapids and Dubuque with the two stop back haul load we picked up at the SAPA plant in Yankton, South Dakota today. If you remember, we were going to try and get our second stop on the last load delivered a day early. Well, we managed to get our third stop delivered early also. Here's a tip: Keep good communications going with your customers. Once I realized that I was going to make good time in getting to my second stop on that load I called my third stop to tell them that I could be there by 3:30, that is the cut-off time for receiving at that location. I told them how many bundles I had for them and they said if I could get there by 3:30 they would unload me. I really believe in communicating with my customers. Because I run for a dedicated account, many of my customers end up seeing me repeatedly, and some of them kind of get to know me. I've even had them request me for a load. One time when my dispatcher had me on a very time sensitive load, he later informed me that the anxious customer called him in an effort to verify that the driver was going to make it on time. When he told them it was me at the wheel they were relieved and said they would quit bothering him now because they knew that I always got there when I said I would. I was proud when my dispatcher told me about that experience, but he was even more so - you could hear the satisfaction in his voice when he said "I wish all my drivers would call ahead to their customers like you do, and keep them in the loop of what's going on, it saves me a lot of headache and extra work." I'm sorry, I'm getting side-tracked - I pulled in at that third stop at 3:28 and they had me unloaded by 3:45! We then rolled on to within about 25 miles of our final destination in Yankton, South Dakota and stopped for the night at the Coffee Cup truck stop. 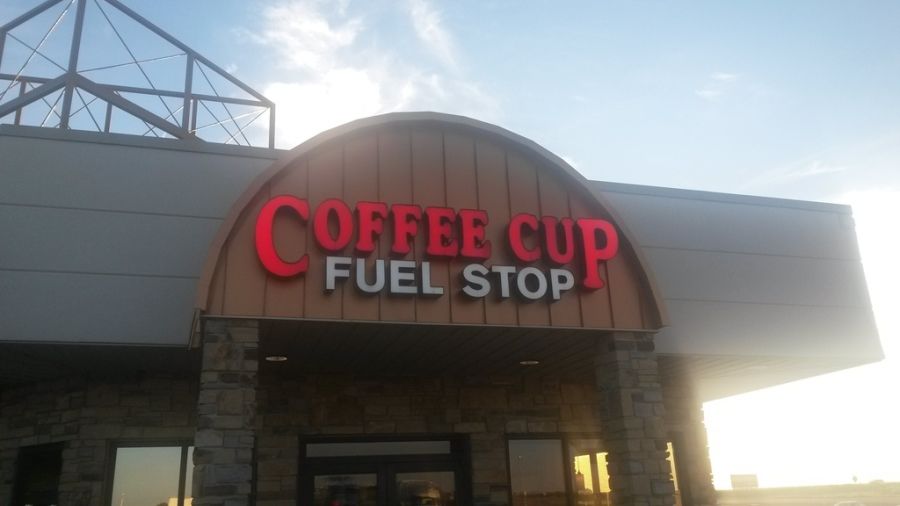 I had gotten a pre-plan for a back-haul load from Yankton to Virginia earlier in the day, but just about the time I shut down for the night my dispatcher sent me a message saying that it looked like they were going to cancel that load for some reason. So I sent him a message telling him that I was going to wait in the morning to hear from him about my back haul before I started my fourteen hour clock by delivering my final stop. Of course, he was having trouble in the morning getting people to respond to his e-mails about my load - so eventually I had to make a decision about when to start my clock. I wanted to turn this load in by 10:30 am today so that it would go onto this weeks pay, and there was no way for me to get it delivered without starting that fourteen hour clock. Finally I decided to go ahead and get things started so I could turn this one in. We started our clock around 9:30, did our pre-trip, made our way into Yankton, got unloaded and turned in our paper work at 10:25. They were able to unload me quickly because I only had one piece for them. If you remember that photo I shared earlier of this load, you'll know that it now looks a lot different after making those first three stops. 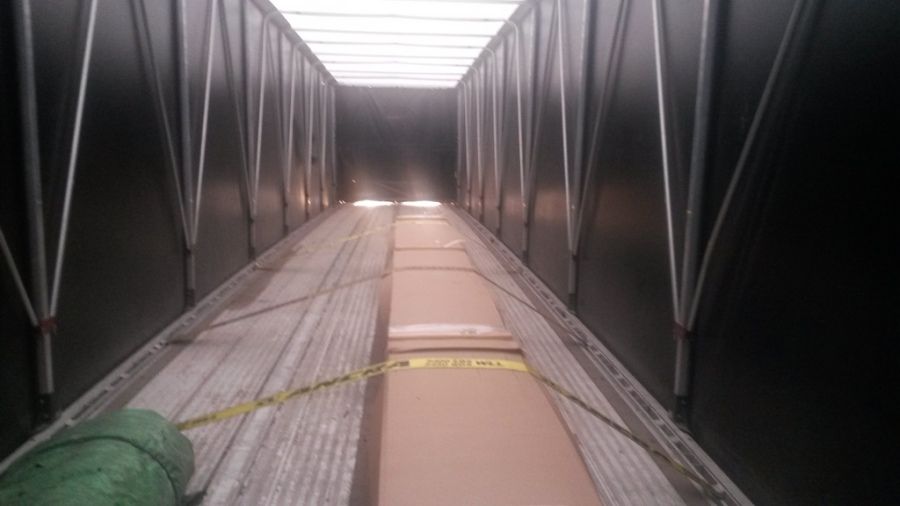 I almost forgot to share with you this picture of Abigail having her morning cup of "Joe" - I don't drink coffee, so I'm blissfully ignorant about that mysterious black liquid. I would call her drink "a cup of it cost a latte", but it probably has a much more sophisticated name like "double truffle super snuffle Viente creamy espresso, or something along those lines. What ever... she's my guest this week so I'll gladly indulge her tastes - I'm really enjoying having her along. 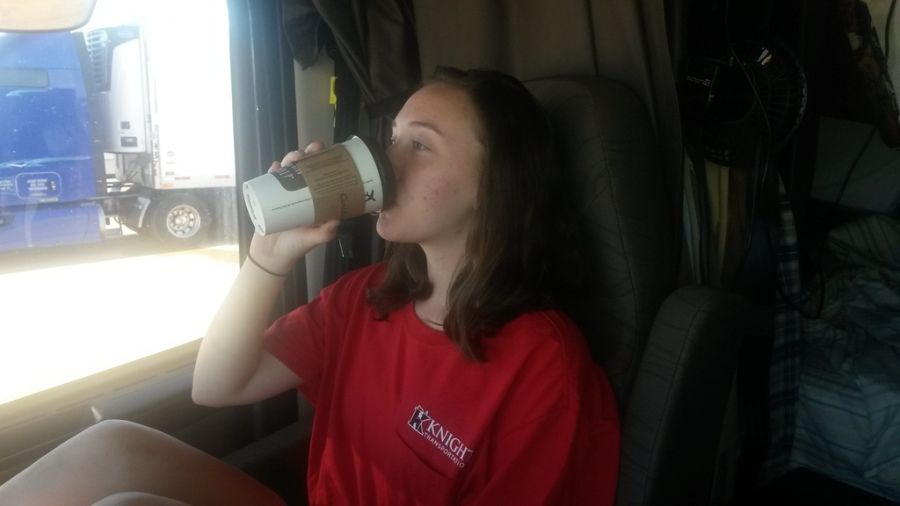 Okay, so we are on our way now to Cedar Rapids, and Dubuque. I was able to get to within about an hours drive from Cedar Rapids tonight and had precisely four minutes left on my fourteen hour clock when I parked at the Pilot on I-380 exit 68, at 10:45 p.m. I'm supposed to deliver at Cedar Rapids between seven and eight a.m. tomorrow. After I take my ten hour break I will be past that time frame already, so what is a professional driver to do about a problem with his scheduling like that when it arises? Well, you could go on line and complain about how stupid your dispatcher is, or how sorry your company is, and you would be just like all the other drivers out there who seem to get some sort of energy by pointing the finger at others for their misfortunes, or you could just try to figure out a way to "get er done." I am constantly thinking ahead, sometimes days at a time, and sometimes just a few hours ahead, but you've got to understand the rules of the game, and the ramifications of all your choices when you encounter these types of problems. Tomorrow night I'm going to jump back in here and tell you what we did in this situation - there's a simple solution, but I want to make sure it all works out right before I share it with you, plus it will give you something to think about while you are waiting to see how it all worked out.

A flatbed with specially fitted side plates and curved ribs supporting a tarp covering, commonly referred to as a "side kit". Named for the resemblance to horse-drawn covered wagons.

Great stuff, thanks for this thread Old School. Robert B. (The Dragon) yes, I breathe fire and other sideshow tricks
Indianapolis, IN
Experienced Driver
Posts: 1952
Joined Us:
5 years, 5 months ago
98 Photos

I've gotten in the habit of calling all the consignee's when there's the opportunity to get there early. Only in one situation so far did I get a no. I did however get a warehouse foreman who had just hung up his keys and told me to come on in and he would go ahead and set me up at a dock so I could do my 10 and not burn my clock in the morning. Great guy.

Glad to see you're having a fun trip so far, I've seen the ads about the South Dakota group and while it's tempting, I could only do it if I was single.

I love this thread!

My guess for your solution to this problem? Something involving the split sleeper... Take 8 hours now and then take your 2 after delivery?

Old School: I am available for adoption! I'm way past the puppy stage but not yet a senior. I'm house broke and come with my own tiny income :) On a serious note, your daughter is SOOOO lucky to have you. I wish I could've had this experience as a teen...I wish I could have this experience NOW, before I make my final decision to change careers.

Life On The Road Photos Truck Driving Lifestyle Truck Driving Stories Trucker's Family Matters
Click on any of the buttons above to view topics with that tag, or you can view a list of all forum tags here.