What the hay, I'll put my two cents in on this roadkill post.

Everybody's situation is different, but just starting out I would not recommend it. What if you rub someone in the company the wrong way? All it takes is one mistake and you are out that door. And unless you are perfect, you will make mistakes. Having to find a new company just months into your career could possibly end it. I know.

If you have gone to a school giving you 150+ hours behind the wheel I would be less concerned. if you are in a situation like I was: company training with 10 hours drive time then acquiring my CDL , 4 weeks with a trainer then solo, no way.

By the way I think the cow likes it.

It appears to. Wagging its tail!

I appreciate the candid answers, thanks! I've seen some things about how important good hydration is to staying alert and clear minded behind the wheel.

Here's a question for you....since its winter and we are shutting down for safety reasons.,..do u have the ability to activate the camera and say "due to this dense fog, blizzard, etc I'm shutting down"? So they can see how bad things are?

Here's a question for you....since its winter and we are shutting down for safety reasons.,..do u have the ability to activate the camera and say "due to this dense fog, blizzard, etc I'm shutting down"? So they can see how bad things are?

That's a good idea, Rainy. Most of the company cameras have an activation button (good for the ol' 20 second clip) so the driver can record events that don't trip the sensors.

On the other hand, Swift says don't record "just because" or you see something cool. But a video out the front, and you wearing all your cold weather stuff might be convincing. 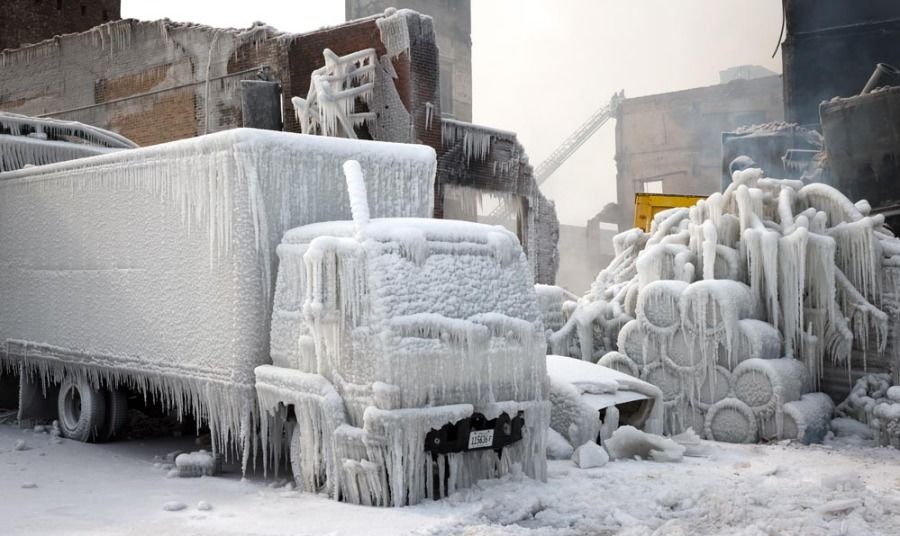 Coming from the bus I definitely have times where I hit the record button for safety reasons ahead of me, and so that if something comes back on me later or I get a complaint, I have the precise clip of what was going on to back it up.

One of the major ones I get is when people make a left turn across the path the bus is going, and I have to brake. I know I'm going to brake hard enough to activate the camera in the first place because no matter how far you look ahead, the person is going to turn right after you stop expecting them to. So as I'm braking I hit the camera so that they know that I'm aware of the situation.

One time I did that, and the bus was well clear of the car— but the video captured the car careening into the car in the lane to my right, who apparently tried to say that he didn't see the car making a left because of the bus. Video cleared me of any wrong in that incident, and showed that I was far enough back that the civilian damn well ought to have been able to see the oncoming left turn car. So.

I think driver facing camera.is generally a good idea, because if you're not facing the camera, that means youre facing the bunk....which is no Bueno for driving...

I have to say I found this whole conversation that took place on this topic very entertaining. As a former casino security/surveillance agent I have probably have more experience then all of you when it comes to dealing with being watch by a camera. In a casino the only place you will have privacy is your hotel room or the bathroom

Now for your enjoyment

How not being on a surveillance camera saved my job

I returned to work one Friday after a not so great vacation. Upon coming into the surveillance I was informed I was being suspended for violating company policy falsifying reports. I was told to come back Monday and meet with human resources. Monday and the first thing I hear is your being terminated for falsifying reports conduct unbecoming a surveillance agent, failure do your job.

So I asked what report I had falsified? They explained who I had done a report on and how my video coverage didn't match the report

After this HR person got done telling me all this. She said you can come back tomorrow for your check. I said okay I will do that. I then took one her business cards and wrote my name on it and gave it to her. She asked me what it was for? I told her it was for my settlement check the company was going to pay me. She laughed and said something rather rude.

Where were the pictures of? A piggy wiggly in Tennessee. I showed her pictures of the restaurant I had dinner at that night. I had a receipt from a store for that night all in Tennessee I put my phone away and said my lawyer will be contacting you. As I walked out the door I said you should look at the following four cameras in regards to this report more specifically me. I explained what the cameras were and walked out. She was on the verge of having a nervous breakdown

Needless to say within two hours my phone was blowing up. I got dozens of calls from human resources, the legal department even the casino president and vice President. In the end I got an extra week of paid vacation and a decent raise. Could I have sued and won? Oh yes I could have. But I knew the five or six figure check would come at the price of jobs.

I never found out who was behind the report. It wouldn't be the last time the surveillance department would target me and target me they did

Why do you suppose that was?

Eh.. i dealt with postal inspectors, bombs, and anthrax... videos and directional microphones listening to all of our conversations became.normal.

im not exactly sure what all of this has to do with the cameras and trucking, other than if you always feel the victim, you will not get far in this industry.

Driver-Facing Cameras Understanding The Laws
Click on any of the buttons above to view topics with that tag, or you can view a list of all forum tags here.