Background Checks Vs. The Matrix

I am the chosen one. I am different than those that came before me. I have a gift. A gift combined of insight, deception, and ignorance. I am Neo and I will beat the background-check matrix...

Once again, I find myself flummoxed over the lengths people will go to, believing that they are finally the one that is going to beat the system.

Today we lost another student. That person only started last week, but we spent quite a bit of time talking and I came to be somewhat impressed by what this person already knew from past driving experience with another company.

And today (Wednesday) that person was shown the door and told they have 24 hours to leave. They have no money and no way home. The best CRST will offer is a ride to a local homeless shelter.

At first, I was damn near irate over this action. But the more details that came out, the more I was mad at myself for not stepping back to get a clearer view of the situation.

Turns out this person had failed a drug test at that other company a few years ago. Worse, they failed to mention that when they were talking with the recruiter that brought them here.

The persons first question to me was, "Why did they bring me all the way out here if they were going to send me home, anyway?"

At that point, I was almost beside myself when I asked, "Why in the hell did you think you could get away with not telling them?"

According to this person, this company is evil and unfair... Apparently they brought them all the way out here from her home state just to abandoned them here in the middle of Iowa!

Let's cover some quick basics about the evil corporation. First off, it's quite clear that CRST (or other trucking company's) became a billion-dollar company by spending their time searching for people that they could inexplicably abandon in the middle of Iowa. That's a productive and efficient use of resources, right?

Second, they only do a cursory check on potential students before bringing them out here. They start around 100 new students every week. And that number is often down to around 70 by the end of the first week. Can you imagine the amount of money it would cost to run a full background check for every person that shows up each week?

Second, how much of that money would be wasted when a third of the class is gone within days? Not to mention that CSRT already forked out the money to buy bus tickets for all of these people.

But they do eventually get around to the FULL background check. And if there's something to be found, they will find it. It's a billion-dollar company with a vast network of professional resources at its fingertips... How do people mistake that for some mom & pop operation that can't find it's own left foot?

Anyways, there's this person stuck in Iowa now with no way home. And while I feel some empathy for the current situation, I can't help but think that someone made their own bed in this situation, and now it's hard to feel too bad at bedtime.

Had this person disclosed this failed drug test in the beginning, they would never have even been brought out here. Further, had this person really thought about the (losing) gamble they were taking on, they might have at least made some sort of plan just in case the deception failed. I suppose if they were absolutely compelled to lie about this issue, then they could have at least taken measures to not get stranded in the middle of Iowa.

But none of that was necessary. No honesty, no forethought, and no safety net plan. Why? Because they were going to be the first to beat the system, the first to hide their history, the person smarter and luckier than all who have come before!

Yet, invariably, every week someone else comes along who is different, who is smarter, who is finally going to beat the system!

It's a sad but true fact that a lot of people think they have it all figured out. For many, this is the first time they have left their safety net of home, their warm, secure cocoon. They will quickly realize that the tricks they use to fool their mom or their friends won't work in this corporate world.

Comprehensive background checks can take weeks to complete. In addition most companies do not initiate one until they are reasonably sure they have a viable student driver.

Be honest..,disclose everything required on the application, nothing more. Simple, yet so many people cannot grasp the importance of it and end up in the same predicament as Jeremy described.

Everybody has a skeleton in their closet. Most background checks by the companies will discover them, no matter how well the applicant thinks these are hidden. The truth always surfaces.

It sounds sad to say I'm "fortunate" that I don't do drugs, alcohol, and have no record at all, not even a ticket.

That should be the default.

I got in trouble a lot in elementary school though 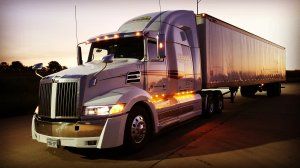 I am sure there will be those that continue to try "beating the system" even when the Drug and Alcohol Clearing House is a requirement for carriers doing a pre-employment screen. There will always be at least one who thinks they are smarter than the system or that the system should not apply to them for whatever wild and crazy reason their mind recently concocted. Obviously there are things, such as a previous positive test that will preclude any carrier from hiring you until you have completed the Substance Abuse Program, but in many cases being honest and transparent will save heartache for everyone in the long run and may even net you consideration points with a potential employer because of your candor and understanding that you know this (whatever this negative is) is not a good thing in the transportation industry.