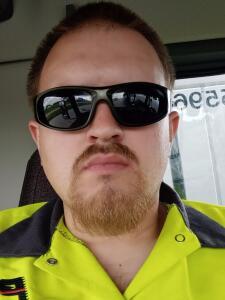 I had an interview today for a position i feel to be a much better opportunity and was told she's forwarding my information to another person who will interview me and take me for a road test. I should receive a call either tomorrow or Monday. This job sounds like that perfect job (still local) so im hopeful, just stressing myself about the road test. Anything special that i should do or just show them i can safely operate the vehicle and do a thorough pretrip? Im confident (not ****y) in my abilities but with how great it sounds just dont want to mess this up =). The lady told me that although this job id pull a 53' and ive pulled strictly 28' other than school im still one of the best candidates due to a year of being accident and citation free. The members here ain't joking when they stress the importance of getting that first year under your belt. They're hiring 10 drivers and have had very little applicants apply because they dont offer a sign on bonus. Honestly with their compensation package a $5000 sign on bonus everyone else is offering isnt needed. Send me some prayers! I'll keep everyone updated. I'll share the reasons why i think its the perfect job for me later on regardless if im offered a position or not. I applied last saturday evening, got a call tuesday with an interview thursday, 2nd interview/ road test will likely be next tuesday and possibly be sent for my physical at the end of next week. I was told it may even happen faster as they feel the need to pull the trigger on QUALIFIED drivers due to such a high demand. Im really glad i got the ball rolling with getting sent for a sleep study last month so that doesnt hold the process up.

Congratulations on getting this far in the process.

I recommend you just be honest and maybe let the tester know you’ll be using some extra caution because you’ve been pulling smaller trailers.

Good luck! The only thing you have to fear is fear itself. Hey, they WANT you to drive for them, they would be stupid to make it impossible.

I recommend you just be honest and maybe let the tester know you’ll be using some extra caution because you’ve been pulling smaller trailers.

I have been upfront about what ive pulled and my experience level. Id love to get the job but not bad enough to lie and them expect me to do things im not familiar with. I told them id need training as ive not had to deal with sliding tandems , weighing or even fueling! Where i currently am we pull into the Ryder yard (where we park) and they fuel our trucks.

So more about this job is a 4 day work week. My schedule to start with would be being dispatched anytime from 10pm until 10am, so thursday 10pm through monday 10am. The pay is $30 an hour, most drivers average 48 to 50 hours a week but if theyre short drivers they'll allow you to work off days providing it doesnt negatively affect your regular scheduled days. I would be delivering to 2 or 3 Hyvee grocery stores in the 7 state area with most routes getting back same day. In the event of a planned layover (such as springfield missouri) I'd be sent in a sleeper cab. If i run out of hours when its not a planned layover id come out of pocket for a hotel and meals which would be reimbursed. Routes are bid daily so unfortunately i wouldnt have a set route although i was told most guys take the same route most of the time. All employees receive a quarterly bonus of 10-15% of their wages earned that quarter which is determined on company profits. 1 week paid vacation after 8 weeks. However the best part about it would be that although id still be unloading my truck id have an electric pallet jack and pull full pallets off, not touching it. Also, i would have priority at the loading dock so if pepsi or coke are delivering theyre required to vacate the dock so i can unload. This place is so hard up for drivers due to growth that theyre even hiring drivers on a part time basis, requiring them to only work 1 day a month!

I left my interview at 5pm yesterday. She called my references at 9am this morning and called me back by 10am to set road test for next wednesday. Its Definitely is a good sign theyre quite interested.

Best of luck Rob. Sounds like a great opportunity.

Keep a watchful eye on that wagon...the extra 25’ part of it that is.

Congrats Rob, and good luck. It sounds like a good gig. As G-Town said watch that extra 25'.

Just watch those tandems in your spot mirrors when making turns. Getting used to sliding tandems will be easy.

Had my road test and interview at 3pm yesterday. Received a phone call this morning offering me a position! I just need to pass a DOT Physical and drug screen. I was upfront about having just got a CPAP machine yesterday morning in case receiving a 3 month card until im compliant would cause any problems and she said as long as i have a valid medical card it doesnt matter the duration. I also need to pass a lift test which shouldnt be a problem given the physicality of the job im currently doing. My training period will be dependent on me. Most drivers get about a week of training to learn the process at the store but they're willing to train me until both i and my trainer feel confident in my ability up to 3 weeks. The most physical thing they do is occasionally downstack a layer off the pallet if the cooler at the store is short. Definitely have to watch what i eat so i dont gain all the weight back that i lost. WOOHOO!

Choosing A Trucking Company Dedicated Jobs Driver Responsibilities Local CDL Drivers Refrigerated Regional Jobs
Click on any of the buttons above to view topics with that tag, or you can view a list of all forum tags here.