Failed My Backing...is This The End?

So I attended a company sponsored traing program....my experience to say the least was disappointing. I passed pretrip no problem, but I knew I wasn't prepared for the backing portion, I explained to the director that I wasn't prepared to test that I was unable to even do straight line backing that I hadn't had enough practice on backing, the response I was given was "it doesn't matter , you have to test even if you aren't ready". I stood there confused, but I stayed the rest of the day hoping to get a chance to back a second time...no chance came. The next day I was half way through a mock test when I was told to report for testing...I failed...over the next 9 days they continued to test me even though I insisted I needed more practice. On day 9 of testing I had an instructor who made backing click and I did a zero point Alley dock...but they failed to teach me straight line...i acquired 14 points on straight line...day 10 I completed Alley dock but failed as I pointed out at the last moment on Alley dock...I was so nervous because of the time...id had to reset so I was short on time...I was sent home after this fail...i was told I could return in 30 days...but after speaking to the recruiter I was told no. So I began to apply for other company programs, but it seems I'm being denied the chance to redeem myself. This school allowed me to do 1 chance to back each day...and some days none...after testing began they allowed one before testing and sent us back to dorms after testing...i hung around most days just to see if I could get a chance to back...it only happened once...I know I can do the backing now but no company seems to want me in their program and I can not afford school on my own. I'm at a loss, I put my life on hold to do this...my family is suffering because I took time off work and now it was all for nothing... I feel defeated and let down. I don't understand why I was forced to test when I wasn't ready. I had 3 less days of backing than the rest of my class because they lost my drug test...wasnt given any more time to prepare. I got to drive 4 times I believe maybe 5 I was 5 days behind the rest of my class on that.. I need advise as to what to do, is there a testing limit? I live in KY and the testing was done in Iowa.

Which company's training program did you go to? There may be other companies who will give you a chance. When at trucking school it is up to you to speak up and get the help you need.

I was at CRSTs NATDA . I spoke up I told them I needed more practice. In fact I was told by the director that " no amount of practice would help me" but being allowed one chance a day to practice most of that was alley dock wasn't enough. I even asked for a day off from testing but I was refused. We attended classes 6am to 6pm (except for days after tests...they told us to leave...i wouldn't I stayed to observe and begged for chances to back). So before I left I asked about what to do next, I'd been told I could return in 30 days by instructors, and then I was told to get a hold of my recruiter to get a return date. But when I did she said 6 months initally then she said that I hadn't been told 30 days and that I can't return. I've applied elsewhere and was told I am unable to be accepted at this time.

Which company's training program did you go to? There may be other companies who will give you a chance. When at trucking school it is up to you to speak up and get the help you need.

You will have issues going elsewhere until you pay the amount CRST charges for their tuition. They are very serious about enforcing the non compete clause in the contract and have sued other carriers who have brought their former students in who haven't fulfilled their debt. I believe they had sued Swift for like 135 million for doing so. That is the reason why most carriers are telling you they cant bring you in at this time.

He's not wrong. When you apply to other places, those places get this letter: 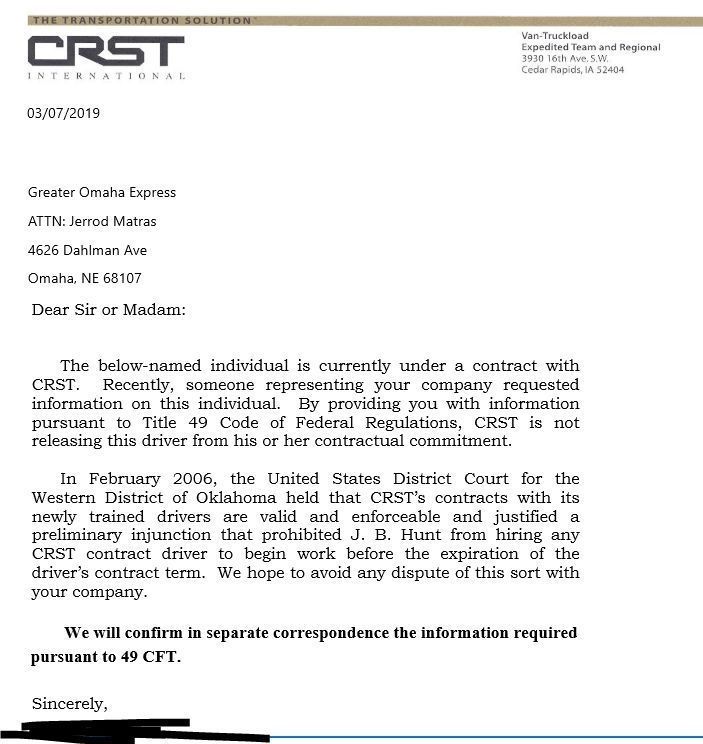 The best thing you can hope for is to wait 30 days, and call back the place you applied to. (that's that last line at the bottom of the "CRST letter" that mentions '49 CFT' - they have to respond to Employment verification requests, but they are gonna wait the full 30 days that the rule allows them to wait.)

And JB Hunt before that.

I have been on this forum for just over a year, and this comes up every few months.

Sounds like nearly th he same thing that happened with Doug a few months ago.

CRST Van Expedited Attending Truck Driving School CDL Test Preparation CDL Training Company Trainers Tips For Backing
Click on any of the buttons above to view topics with that tag, or you can view a list of all forum tags here.