A Week In The Walmart Private Fleet

You'll notice I've "backed up" my hours this week, meaning I've started a little earlier each day after limiting myself to a 10-hour break. I know that's nothing out of the ordinary for a truck driver, but what it allows me to do is get a nearly full day on my go home day, while still getting me home at a decent time. You see, many of the WM drivers I've come across like to slack off a little on their go home day. It's natural to want to knock off a little early at the end of your week, but it sure puts a dent in the paycheck.

Besides the obvious benefit of a bigger paycheck for a full day, maximizing each day as I do has the added advantage of maintaining a significant Average Daily Pay (ADP). The ADP is averaged over your previous 6 months of daily figures, and is what used to pay you for personal, sick, or vacation days. It's a blatant production incentive, but one that pays off in a big way for those drivers that capitalize on it. When a first year driver can earn up to 25 paid days off a year, that's a bunch of money on the table.

Arrive at the Valley Stream, NY Walmart, the busiest Supercenter in the nation (at least that's what they tell me). I believe it too because there's a near-constant flow of trucks in and out of here on a daily basis. They even have a section of the parking lot specifically for us to drop and hook , keeping us from having to pull back to the extremely busy and extremely cramped dock area. 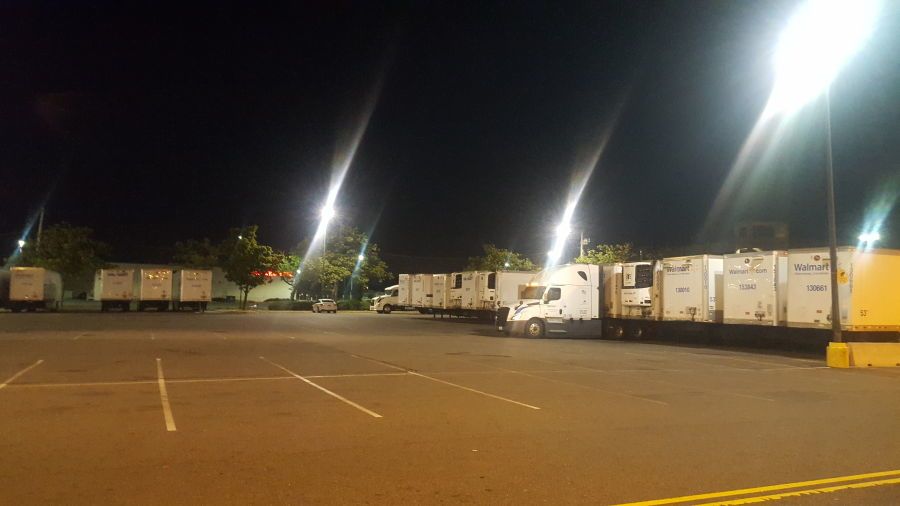 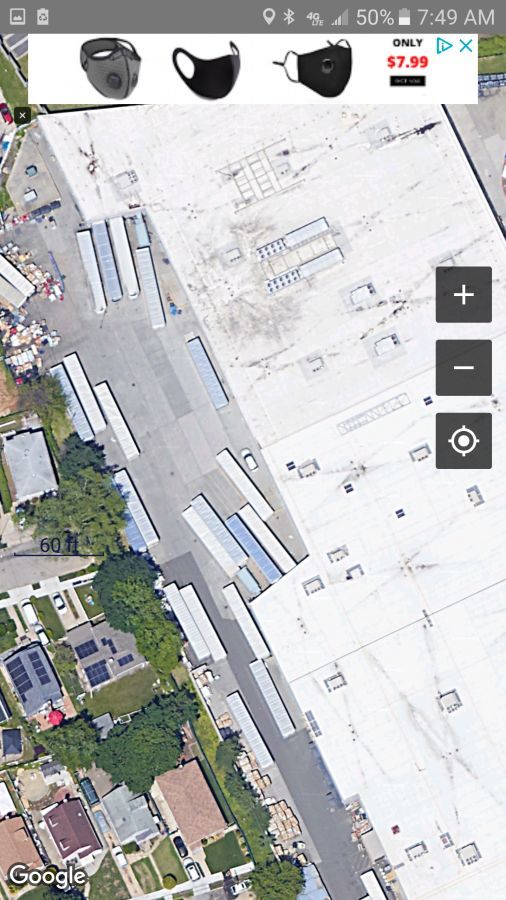 A yard jockey with a single screw day cab ferries trailers back and forth.

On my first trip there I made the mistake of pulling out back to the dock, where I found myself amid a bevy of food vendors, all jockeying for position and dominance. It took over 2 hours for me to get everyone to cooperate enough just so that I could get turned around and headed back out to the drop area. Lesson learned that day.

Depart for the 225 mile deadhead back to Johnstown. ETD set for 0930 with 4.5 drive hours remaining.

Arrived at the yard, and after a quick 30 I grab a trailer and boogie out to my next load: a 120 mile round trip remix drop and hook.

Arrive at Clifton Park, NY for the swap. The trailer I'm picking up was supposed to be an empty one, but instead it's loaded with pallets. So I called the office to have them make a change to the trip to include stopping by the pallet yard. It's no big deal since the pallet yard is only about 20 miles from Johnstown. Depart 1045 with an ETD of 1300 with 2 hours drive time remaining. With such little time remaining at that point, I'll likely just call it a day.

Arrive at the pallet yard, grab another trailer full of good pallets, and depart by 1215. I can smell them 3 days off coming.

Back at Johnstown, and since I've heard no mention of another trip I'm going to assume they don't have anything that'll fit within the limited time I have left. After checking in with dispatch that is confirmed. I'm outta here. But first...

Joe will be hopping in this truck first thing in the morning to start his week, so I'll take some time to have it in perfect ready condition for when he arrives. I top off all tanks, clean the windows, wipe the interior down with Clorox wipes, sweep and vacuum, the whole 9 yards. Three of us share two trucks, and we each clean up after ourselves this way each week, leaving the trucks spotless.

Afterward I check in with the office again to confirm my next start date and time. Peace I'm out.

This week was a bit of an anomaly in some ways.

First, I've never had a week like this where I hauled nothing but grocery loads. On average, half my time is spent pulling GM freight (General Merchandise).

Second, I've also never had a week where I hauled strictly from 1 DC. Most weeks have me popping into different DC's regularly from Maine to Ohio to Virginia. Sometimes I may even see 2-3 different DC's in a day. So this week was quite odd in that sense.

Third, zero backhauls this week, another rarity. I normally average two or three backhauls per week. So I don't know what's going on with that either.

As G-Town once said: This job is a churn. You stay moving in a constant effort to keep the goods rolling to the stores so they can keep the shelves stocked. It's a good time, and can be very rewarding.

Time to make the donuts. Pretripped and rolling by 0330 for the remaining 66 miles. This is such a good time to roll into or near the city, traffic is always light. Even the Throgs Neck Bridge, which is under perpetual construction, is a breeze.

Ok cool. I went about my business doing my normal post trip. When things were squared away I climbed up in the cab, released the kingpin, dumped the bags, slowly pulled away...

and watched in horror as my trailer gently but squarely sat right down onto the drive tires!

Yup, I'd forgotten to lower the landing gear. At a time when I should have been laser focused, I focused so much so that I overlooked the obvious. Thanks to good training, I at least adhered to one basic practice I always follow: When pulling out from under a trailer, always go slow and watch your mirrors. It's this practice that allowed the trailer to go down silky smooth without a sound, and I saw it the instant it happened. It was so smooth that the managers didn't even notice. I simply re-inflated the bags, climbed out and lowered the gear as if nothing happened. It helped that their attention was divided between myself and other drivers at the time.

I'm sharing this because there are 2 lessons here that any driver, experienced or not, should be reminded of.

1- Don't get kocky. In showing off, I threw myself off my own game instead of focusing on the business at hand.

2- Never get so full of yourself that you can't share your own mistakes, so that others may learn from them.

All my little boo-boos have happened EVERYTIME my routine is broken. I have to make a mental note to either start over or doublecheck everything.

At least you caught yours Turtle I can attest to the loud bang the trailer makes when it fall to the ground.

A good lesson learned with no damage just a little self pride.

As G-Town once said: This job is a churn. You stay moving in a constant effort to keep the goods rolling to the stores so they can keep the shelves stocked. It's a good time, and can be very rewarding.

Amen to that! I would not trade it for anything.

I’ve eclipsed the 2000 mile mark 2 consecutive, 5-day weeks. For you OTR guys, that’s nothin. For us, 2k miles in a 5-day period is significant. Really gotta hustle to make that happen and really need a cracker-jack planner who knows the territory so available clock can be maximized. Thankfully I’ve got two such working with me, in total lock-step.

By day 5 I’m exhausted, usually less than 6 hours remaining on my 70, can’t wait to get out of the truck for a couple of days. However...after one full day at home I’m chomping at the bit to “get back at it”. I can’t explain it, but I know I am doing exactly what is best suited for my personality and driving (I enjoy backing and navigating close quarters)

Gotta hand it to you Turtle, this diary is exceptional! Don’t know how you have the time and energy to turn this sort of quality out. Thank you!