Page 1 of 3 Next Page Go To Page:
PackRat's Comment

I accomplished something yesterday that was not on my "Bucket List", in that I had the driver's steer tire blow while moving at highway speed. Scariest thing I've had so far while driving a tractor trailer by a long ways.

This happened in Missouri on I-70 east at the 72.5 yardstick. 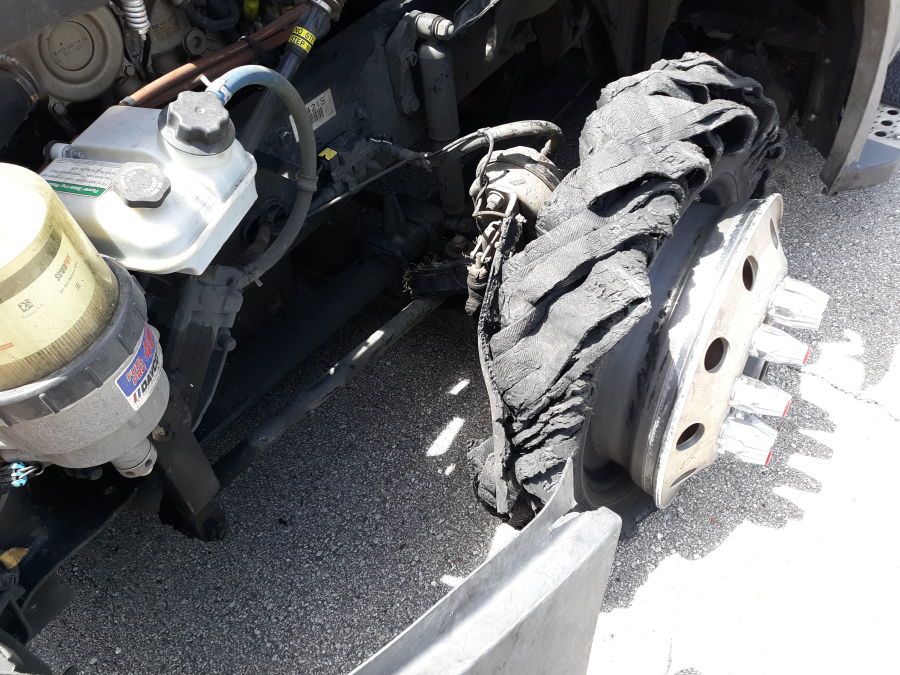 My truck had service completed 2400 miles previously at a company terminal. Both steer tires were replaced then, and supposedly an alignment. I did not run over any road hazard to cause this. I did a good pretrip yesterday morning as well. All tires passed my visual inspection.

Here's a picture of the right steer that would have also blown shortly. Note the steel cords showing through the entire circumference. 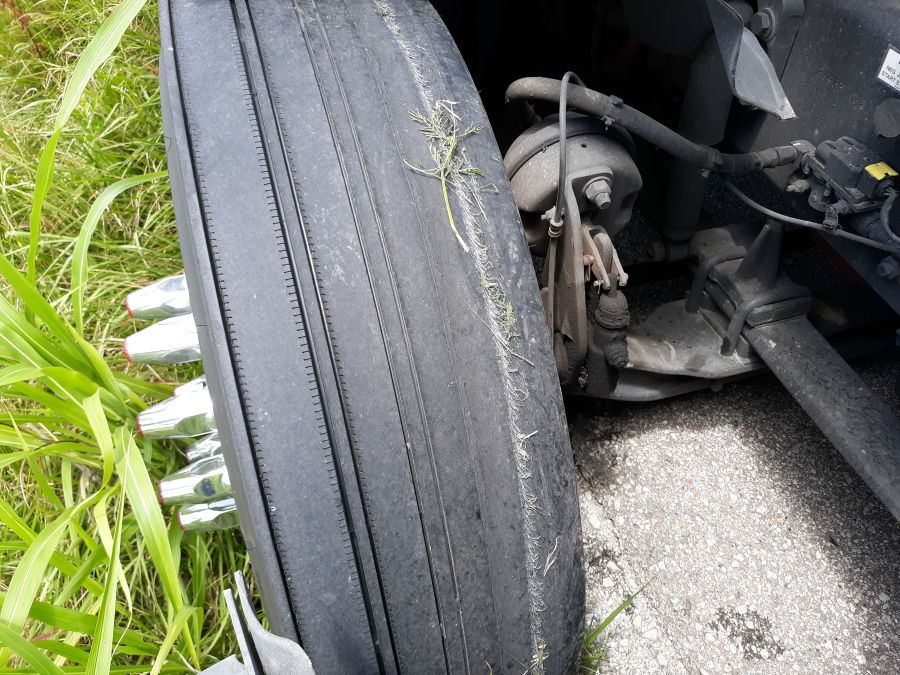 I was on the shoulder for just over three hours, waiting on road service to replace both tires. Fortunately, it was driveable after that, with no busted radiator, air lines, or any other systems inoperable.

I pulled into the garage here in KC, MO about 45 minutes ago for our mechanics to remove and replace thousands of dollars in parts that should never have been destroyed.

So far, she will need a hood, left inner fender, left headlight assembly, driver's steps portion, the panel that the hood rides in on the drivers side, several smaller fiberglass panels, the secondary air tank replaced (deformed), portions of the wiring harness, the front bumper, one battery, and several rubber aero strips. 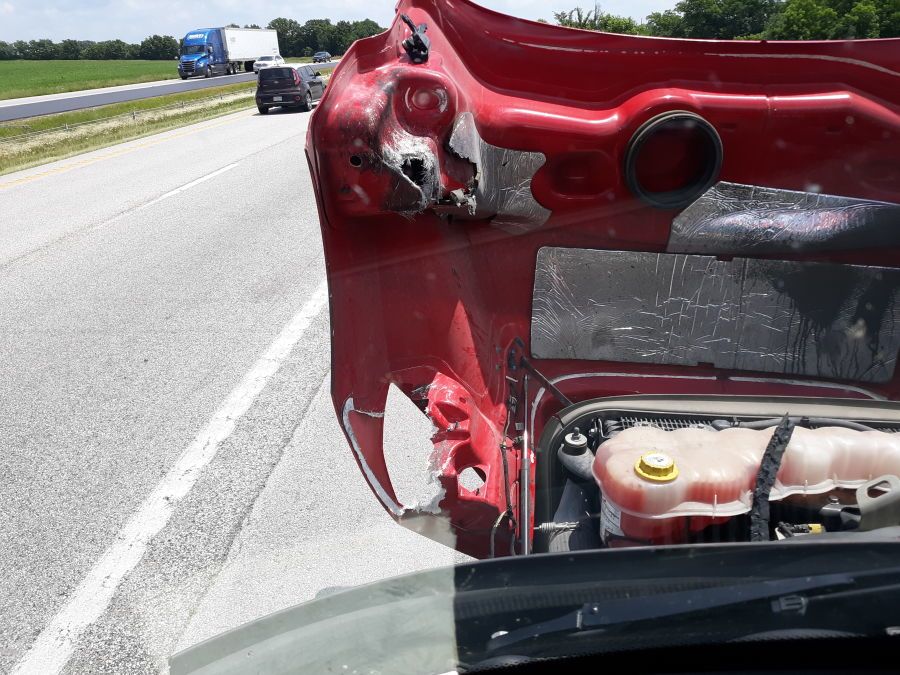 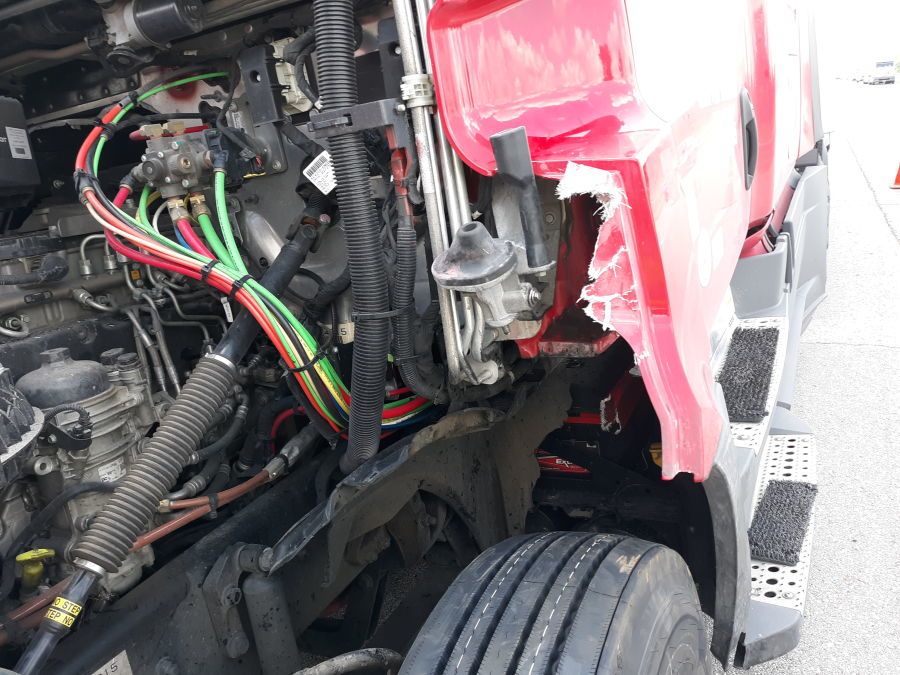 holy crap I'm glad you're ok. Thank you for sharing that Packrat. I'm afraid to know how much those repairs will cost. Does a blown steer that causes that much damage count against the driver like a preventable or anything?

That's scary! I see enough of these on the side of the road to convince me my number will come up one day. Still, I don't look forward to the experience. I'm really glad to hear you survived it well. That's one experience I know is going to really be disturbing if it happens.

Thanks for posting this. Again, I'm really glad to see you handled it well.

holy crap I'm glad you're ok. Thank you for sharing that Packrat. I'm afraid to know how much those repairs will cost. Does a blown steer that causes that much damage count against the driver like a preventable or anything?

Heck no. Wasn't my fault the company mechanics in SLC are incompetent.

Glad to hear that you are okay.

As I mentioned in the other thread, it's a testament to your driving skill.

Hope that we still get to meet up while your in Missouri.

Wow. Glad you're ok. Sure that was a high pucker factor. Enjoy your weekend. If it was yesterday, I may have passed you heading west. I'm doing a 34 at the Joplin Petro. Leaving out tomorrow morning.

It was yesterday around 1215 Central. I think I was rolling again sometime around 1540.

Update from our shop folks is that we'll be here until at least Monday.

Great job keeping it up right and out of a ditch!

Hopefully that is one thing I never have to experience.

The way that other steer looks it sure appears something in the steering alignment came apart on you to cause that kind of wear in that short of time. I have only had one steer go bad while driving and it went down slow so I just drove to the side and called for tire service. My only trouble that time was I was in Minnesota at 6:30 PM on a Friday and it was below zero with the wind blowing.

Daggum, good job maintaining control of that one! I’m sure it’s not a question of if it will ever happen or when. I hope they get you up and running again soon and am happy that you are ok. That will surely add a few extra gray hairs in your beard! Happy 4th!

Advice For New Truck Drivers Driver Responsibilities Hard Lessons Learned Truck Maintenance
Click on any of the buttons above to view topics with that tag, or you can view a list of all forum tags here.