I have no idea what that hand signal means. If you can post the proof splitter that it means white power. Or the proof that the person he is standing next to is in fact a member of the proud boys and not just some guy with his face blurred out. Or what that has to do with that fact that a group of grown ass men went rushing after him and caused him to fear for his life whether you want to believe that or not. 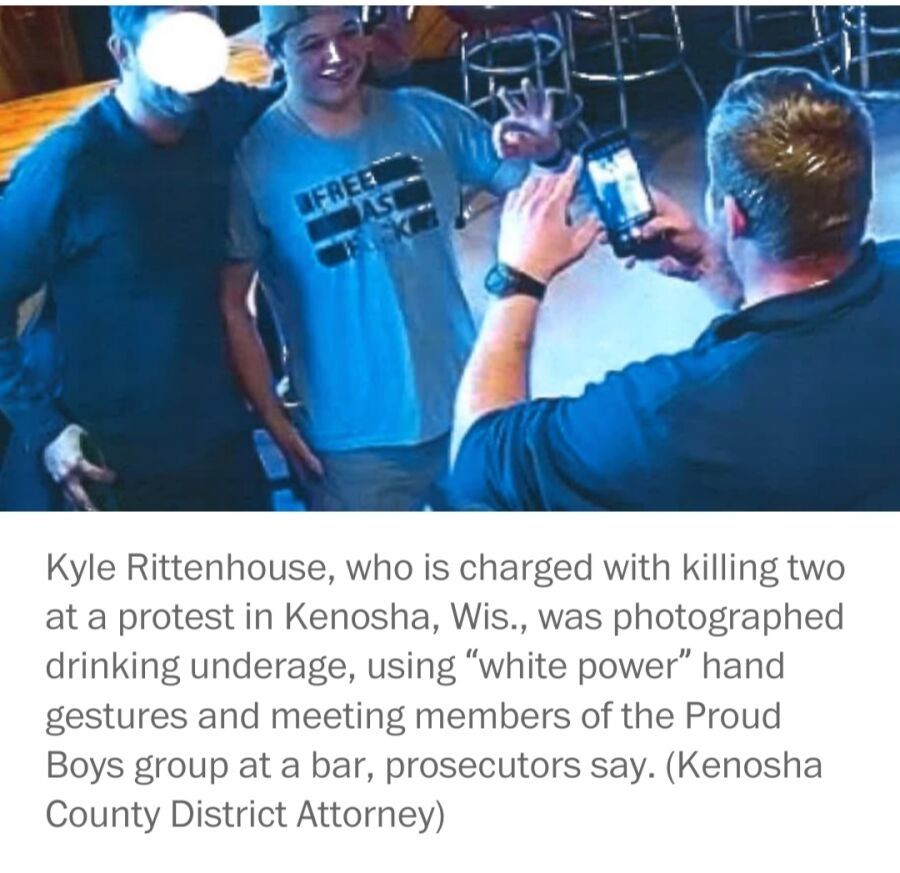 The smirk that almost inevitably accompanies the “OK” sign, that simplest of hand signals, is the dead giveaway in the shroud of internet-age befuddlement: Does the sign, the thumb and forefinger joined together in a circle, the remaining three fingers splayed out behind, mean “all’s good?” Or does it mean “white power” instead?

The smirk gives away the proper answer: You’re being trolled.

The social-media-driven controversy over the meaning of the well-known hand sign has arisen in part as the result of a deliberate hoax concocted on the internet message board 4chan, which in addition to its well-earned reputation as a gateway to the racist “alt-right” is perhaps more broadly known as the home of trolling culture.

So when it gets flashed during a national broadcast, or during a video being shot to promote the Coast Guard, or by a cluster of Proud Boys and “Patriots,” what it’s about most of the time is a deliberate attempt to “trigger liberals” into overreacting to a gesture so widely used that virtually anyone has plausible deniability built into their use of it in the first place.

The problem, of course, is that there are white nationalists, neo-Nazis and Klansmen who have increasingly begun using the use of the symbol both to signal their presence to the like-minded, as well as to identify potentially sympathetic recruits among young trolling artists flashing it. To them, the configuration means WP, for “white power.” From American defense league

So many inaccurate and half truths.

To set the record straight. Us justice department has African American at 13 percent of total population yet they commit more than 67 percent of violent crime. Given that number, reasonable to assume they may get profiled.

Of the total number of black suspects shot and killed by police during arrest in 2020, which was 17, only 9 we're not armed with a gun. Of those 9, 3 did not have a weapon of any sort. So a total of 6 unarmed black men were shot and killed during arrest last year, hardly a systematic pattern.

In protest of communist unconstitutional gun laws being forced upon Virginia, 36000 armed patriots lawfully protested. Not a single shot was fired, no violence ensued, no damage to property occurred. One arrest of an anti demonstrator was made.

BLM is and was founded as communist organization. It's original founder was arrested for communist activities and for inciting riots in hunters point San Francisco. He later was arrested and convicted for insurgency and incititng riots during the 92 riots in LA. The present leadership are members of the cpusa, communist party USA, socialist party of America and we're also original members of the May 5th revolutionary party, known terrorists. In addition, they are under indictments for misappropriation of funds, embezzlement and fraud. Rest assured, issues of racism are not at the top of their agenda.

In general, the prevailing argument of the progressive is "but look at the good they do" and "riots are the voice of the unheard" are preposterous and equate to "well, the trains run on time" in reference to Nazis.

The progressive left radicals are using issues of race for their own benefit. They have been doing it here since the early 60s.

Oh, and your proof if they were proud boys? They sang the proud boys anthem.

I’m curious Splitter why did you initially think that the felons that Rittenhouse shot were black?

Oh, and your proof if they were proud boys? They sang the proud boys anthem.

What would your thoughts be if Rittenhouse was black? Simple question I asked.

Stay out of democrat cities

Good, solid, all-weather advice. In the rare event I'm sent into California (to sub for another driver) I don't even stop to buy fuel. Yeah, it's only a few dollars in tax, but why feed the beast?

If you’re referring to the Kyle Rittenhouse fiasco, you really should educate yourself. 1. He didn’t cross state lines with a firearm 2. He didn’t kill black people. He defended himself against 3 white convicted felons. One was a chomo (absolutely no loss there) and the other two had a long list of violent crimes associated with them.

He did cross state lines with a firearm as he was driven by his mother. He ended up in Wisconsin.

Are you contending that someone gave him the weapon once he got there?

I’m just hoping folks on this forum understand that AON and Fox News are just as biased as CNN and MSNBC. If you’re truly a free thinker the bias of all of these sources is beyond obvious.

He did cross state lines with a firearm as he was driven by his mother. He ended up in Wisconsin.

Yet another inaccurate statement based on a false media narrative. The rifle was purchased for him and stored in Kenosha.