Today I experienced a few different things that have only happened a couple times in the nearly 5 years I've been driving, and even a couple that was a first for me.

It was the boys last day of school so I wanted to be sure to get done early enough to pick them up, plus a big cub scout event this evening so I took a midnight run, something I've rarely done in the last 6 months or so. Maybe I'm getting old but I find it harder waking up that early now and would rather have a 2 or 3am run

A light rain was falling on my run up to the Minneapolis area and actually had another driver compliment me for knowing how to correctly pass somebody in the rain. The only NB traffic I could see was him and myself. I waited until I was about a quarter of a mile ahead of that driver before switching lanes. There's literally no reason not to, why blind him with road spray and make him slow down when staying in the hammer lane allows us both to continue on in a safe manner while not impeding other traffic. I was more so shocked by hearing something positive on the CB instead of the usual crap that we hear from knuckleheads. The other infrequent event that happened wasn't as nice. I had a drop/hook backhaul that the security guard was on a power trip. When we leave our DC policy is top off the reefer if it's a D/H. Well my reefer wasn't showing full when I'd gotten to my backhaul after it'd been running for 6 hours, not to mention parking on a slope. Guard refused to let me in. I parked on flat land took a pic of the Guage and tried to show the guard but he wasn't having any of it. Whatever, I go to the nearest truck stop and put in a measley 3.2 gallons. It clicked off as soon as I started pumping so I has to have it pretty much all the way out just to get something. It just seemed so piddly to get worked up over something so minor that even opening the fuel cap would've solved. The kicker....the guard didn't even double check the fuel level before letting me in when I came back! However, I handled it as a professional and played by their (dumb) rules because really what other choice did I have. Getting bent out of shape solves nothing, the sooner I pick up the load the sooner I won't need to deal with them.

On the Southside of Minneapolis we have a regional bakery they produce alot of the bakery goods to distribute to the stores in that market. Seems like everyday we have atleast 1 truckload of product going there. It's an easy stop BUT the 4 lane divided road/state highway it's on is closed for road work probably like 6 miles. The road construction crew made sure to keep the barricades far enough apart that truck traffic and employees needing to get in there are able to. We also had documentation that we were allowed to do what I did. However I needed to take up the entire intersection to swing wide enough to not hit barriers, and the only way to get down there was drive the mile down the wrong way of the road. Only time I've driven on the wrong side is backing in from the street. Again, not a huge deal because the closure had no other traffic around plus it was 5am. Still quite an odd experience and felt like I was doing something wrong, and kept looking in the mirror expecting a cop to be behind me. Heck, maybe I'll end up on YouTube.

Turns out they had repaved a large portion of the roadway and were installing concrete to separate the turn lanes to prevent anybody from trying to cross traffic. Now if you're leaving any of the businesses in the area you're forced to turn right.

Just when ya think you've seen it all.... surprise! Thankfully, the roadway is supposed to reopen to normal Saturday sometime.

Glad you had a fairly simple day, seems like whenever I try to get home early some crazy shenanigans happen and I get home late

It's hard being a trucker's wife, too. I know when to 'not' ask anymore, haha!

You're mistaken sir. They see a daycab and know they came to get work done that's why we don't need the sleeper

. You sleeper drivers ain't helping our stereotype of being lazy when so many are parked all night in the rest stops and truck stops! *sarcasm*

Also, when's the last time you seen a daycab park on the shoulder of the interstate with their brights on so they could handle nature's call? Quite rare, we're atleast smart enough to use a ramp if no facilities are nearby but I see atleast 3 or 4 sleepers doing it every night if I'm on I80 just running the 160 miles to Davenport and 9/10 times they're about a mile PAST a rest stop. Also I've unfortunately seen someone with a sleeper taking a duece between their drive tires twice parked on the interstate around a curve for the world to see. If you're gonna do it outside atleast try to hide on the catwalk or something geesh. Also caught a fed ex ground contracter relieving himself on the shoulder during stop and go rush hour traffic in KC a while back.

In all seriousness I'm very thankful I don't have to deal with finding parking. I'm also quite thankful when the rest stops fill up for the most part there's parking available in the car side so us real drivers can get back on the road after getting us some sodie water. Or maybe we're just too dumb to realize that area isn't for us 🤷 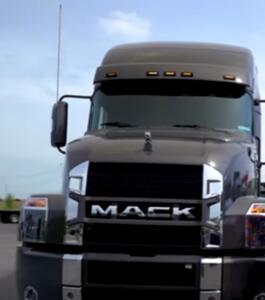 It's true, we communicate with mostly grunts and pointing.

You're mistaken sir. They see a daycab and know they came to get work done that's why we don't need the sleeper