Parking At A Truck Stop, Back In Or Nose In?

I'm still new to this site and even more importantly to the world of trucking so I'm trying to learn and soak up all the advice and pointers I can from those that have been doing this for many years. I just completed refresher training and so I'm waiting to begin at either TMC or Roehl. Hoping to start next monday.

My question is, when you decide to stop for the night at a truck stop, is it better to 'nose in' to the lot or just back in? If you do nose in, how difficult is it to back out when it's time to get back on the road? I ask these because I've seen a few videos of drivers who say that nosing in is one way to help protect the truck from getting damaged by a careless driver and that it's easier if only the trailer is damaged rather than the truck. On the other side of it, I've read comments by some who say that by choosing to nose in, is a rather selfish move and sometimes can set the driver up as a target for those that are looking to rob truck drivers.

Would love to hear feedback on this topic as well as any other great advice on preventing accidents from happening at the truck stops.

Some guys nose in to avoid listening to a refer run next to them. When you do, it makes your truck longer because you have the steer tires against the parking curb instead of having the trailer hang out the back of the spot 6 or 8 feet. Not a problem for the guy nosed in but if its a tight parking lot, the trucks next to you could have trouble clearing your trailer when they pull out of their spot.

Unless you have open space behind you to back out its gonna be tough getting out unless its the middle of the day. I personally never do it and it bugs me when somebody does it next to me if Im going to be pulling out when the lot is still full. Its tough enough moving around in a crowded truck stop with trucks parked where ever they can fit.

Nothing worse than getting up at 3am to start rolling to find you got there early to park legally only to be blocked in by somebody that had to improvise a parking spot.

I've only "nosed in" one time, in Texas. There was a "fire lane" next to me, and like an idiot figured no one would park in a fire lane. Boy, was I EVER wrong about that.

I feel it's more trouble than it's worth in most situations. You need a lot of room "behind" you to go in nose first.

The moment the angle between the tractor and the trailer changes to follow you as you pull in, you will need to duplicate that backing out. (For the same reason your backing practice was such a pain.)

I think by simply observing what you see at the truck stops will give you the proper answer. Everyone above has stressed how hard it is for you to get back out of that hole once you've gone nose in, and they are correct.

I remember well, one night down in southern Louisiana when I was fortunate to find a parking spot at a truck stop near a busy port. I backed in that spot, shut down for the night and was sleeping soundly until about 3 a.m. when I hear a faint sound on my door... it sounded like a woman was tapping the tips of her finger nails on the door. Well, occasionally we have these ladies knocking on doors in the night trying to drum up some illicit business, so I just readjusted my head in the pillow and went right on back to sleep without bothering to even crack open the curtain. About five minutes later some one was beating so hard on my door that it sounded like the FBI was making a raid on my mobile domicile! I jumped out of bed, threw on my britches and opened up my curtain to see what was going on. It was a lady, but not one tying to see if I needed "some company"... she was a driver in a panic - she had nosed in to the spot across from me and now she was needing to leave to make her delivery appointment at a nearby cold storage facility. She was wanting me to move my truck because I was "in the way" for her to get out of her spot... I wasn't real happy, but I did my best to conceal it. I hope she was a rookie, because I gave her a pass simply based on that notion. It was a terribly inconsiderate thing to do to another driver, and I hope she realized it for future reference. All our actions have consequences, if you can see far enough ahead to understand what they might be, it will help you avoid some future problems.

That same thing happened to me. I was set up and had to get out from my spot, so a person could get out of hers. When I drove around to "reclaim" my spot, it was too late, and that is where I "nosed I'm" next to a fire lane. 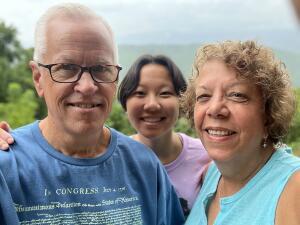 The only exception is, I'll nose in if it is a space I can drive out.

So yeah, I think the general consensus is "just don't do it." I'm of the opinion that the only people who nose in are those who are too scared or unskilled to back in. It just looks ridiculous to see a set of trailer doors next to all these other tractor hoods.

Only nose in if both sides of the parking row are open so you can still pull out forward.

Also, if you nose in, you give the radio Rambos, plenty to complain about lol.

Advice For New Truck Drivers Life On The Road Photos Tips for Parking Truck Driving Stories Truck Stops
Click on any of the buttons above to view topics with that tag, or you can view a list of all forum tags here.