Page 1 of 3 Next Page Go To Page:
Marc Lee's Comment

Terry was cited for failure to yield to an emergency vehicle. The Utah Highway Patrol (UHP) maintained that Terry was at fault even after seeing his dash cam video. UHP Sgt. Nick Street said, “He didn’t stay back the 500 feet. The trooper had made clear his intentions to slow down the entire interstate for a course of over one mile that the slow-down was going.”

PackageRunner says that after seeing the dash cam, they stand by Terry. Terry is still employed by the company.

Terry stated, “I want them to know the whole truth. It was not my fault.”

Highly unusual and probably illegal move on the count of the trooper.

Swerved across 2 lanes. Was in a merge lane, which means until the trooper was actually in the highway lanes of travel, the driver had no duty to stay back 500 feet. Trooper was NOT PAYING ATTENTION and ran right into the truck.

Trooper should be cited for careless driving. How do you "miss" a full sized rig?

As far as I am concerned, the driver was wrong.

I would have had my flashers on and slowed way down until I knew where he was going and that no other police or ambulance vehicles were on the way. Remember, there are so many wrecks out here and traffic stops where multiple officers are involved that he should have been expecting others. Not to mention the fact that he had plenty of room to move over to the left. People shoot at cops too, so I need to know if/where the danger is.

My response may be different from Marc Lee and Rick who haven't driven much... but I have seen some wild things. In Cincinatti a cop tried to pull someone over and the guy jumped out of the car and ran across the highway, and the cop chased him on foot.

If I wasnt already going much slower, I could easily have killed one of them.

Cops won't ticket you for going too slow past them with your hazards on or being too left/right to give them room. Even if they did, Im sure Safety Dept would rather have those tickets than this. 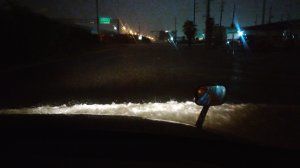 I agree with Rainy on this. Also, the police cruiser was in Terry's lane at the beginning of the video, before swerving to the right and swerving again to get the truck to slow down. Not knowing the full circumstance, but it seems to me that officer was going side to side in his attempt to slow traffic down across all lanes.

I too would want to know what, why, how many, where, and where do I need to be to get out of their way. My flashers would be on, off throttle on brake, engine brake if necessary... and i (hopefully) would have seen those flashers loooong before getting that close to them.

I may have missed it, but again agreeing with Rainy, I don't remember seeing Terry even try to move to the left... actually, I believe he was surprised by the hit, which would mean he wasn't even aware that cruiser was coming at him.

I watched that video about a dozen times. Really a strange situation for the driver to be in. It looks to me that Rainy is right, I see no sign that the driver tried to reduce his speed when he saw the trooper. That should have been his first reaction and as was pointed out, put on his flashers. Anytime there is something unusual up ahead, a driver needs to reduce speed to give himself more time to evaluate and react.

On the other hand, it looks like at the time of the collision, the trooper didn't see the truck and ran right into him. That boo boo would be on the trooper.

I may be wrong here, but I think they both were at fault to some degree. I would like to see what the other moderators think happened here. Old School? G-Town? Brett? etc........

They are both ar fault in my opinion. The driver should have been slowing down as several people posted, but there is still no excuse for not seeing and smashing into the side of a semi like that. However I am a rookie driver with no lawyer background, so take my opinion with a grain of salt.

I quickly watched it this morning but didnt have time to elaborate, however my original thought was in line with Rainy and Phoenix. After watching it again I still stand by it but one thing that caught my eye is unless the trooper was pinned under the trailer pretty stupid to stop in the middle of the highway. I would have slowed down and turned my hazards to get a better idea of what was happening. The police car cutting in front of car on the right immediately told me this isn't a typical situation where hes trying to get somewhere. Even if hes in a merge/exit only lane that doesnt mean he won't move over and regardless it's the law to yield to them. The trooper isn't completely innocent either.

Might be a push - both had some fault in this. Obviously, since the driver can't write the LEO a citation - he's the one who got "got".

From the little I saw in the video - I would have assumed the LEO had moved to the right to pull over the little red car. Truck had 2 lanes to the left of the cop.

Probably should have slowed down - had the cop been in front of him, he would have. He didn't appear to be moving any faster then surrounding traffic.

Still the LEO also has to have the "due diligence" to not run into other vehicles while he's executing his "blocker move" - no one out there should "assume anything".

This is actually the first time I've heard of a cop swerving across all lanes of traffic as a "calming move". When LEO's (typically) want to "pace out" traffic, they do it with multiple cars straddling the lane dividers.

Nonetheless - I won't argue with Rainy (I value my internal organs), trucker should have slowed down - but neither will I lay this 100% at his feet either.

I think the LEO was angry at HIS MISTAKE, and it's easier to write the other guy a ticket (since he can), than own his part in the accident.

Also think that, based on the dashcam video - that his company feels the same, since they're backing him and he still has a job. Getting in a wreck with a LEO and being cited, would otherwise be the kiss of death for ANY OF US.

That was a pretty drastic multi-lane left turn by the trooper.

Trucking Accidents Trucking News Understanding The Laws
Click on any of the buttons above to view topics with that tag, or you can view a list of all forum tags here.