'ello, tapping this out on a phone during downtime while studying my pretrips. This might be a bit long.

Went to the Prime's PSD course on the 5th of August, get back to Springfield on the 3rd or 4th of Sept. For test taking. Here's to passin'

To those thinking of going to prime, not sure how others do it, but.. if you live in Utah, Missouri or Pennsylvania. get your cdl permit before you go to PSD assuming you get sent to the psd class locally in those states, you've already completed a good chunk of your PSD leaves you more time to take in everything else more.

I've had my cdl permit for about 4mos waiting for my dental surgery to fully heal before headin to PSD. my pa is currently driving for prime, suggested em to me.

My PSD instructor is my father, and decided to run me through a quick lil test while driving through the beltway, thankfully not during rush, lol.

I've made a few pretty bad mistakes early on. but, take em n never repeat them.

For one.. I dont remember where we were, but I'm glad no cops were around. ended up blowing a red light. Woops.

How it happened.. Was told not to approach every green as if it's a fresh and if I didnt see it turn green to dlow down. Well, I did but ended up getting to the "if I stop now, I'm gonna be in the middle of this intersection." line.

Ain't making that mistake again. its fresh on my mind even though it was a while ago now.

Another, was a hard stop this one happened before the red. Thankfully was just bobtail. So no load while that.

Probably one of my worst mistakes, ontop of the red, I did a pretrip. Pa started teaching me some more wtuff.. aannd a weigh station just... I believe right after dc and Baltimore, I had forgot to latch the hood. woops. All the stuff had overloaded my mind and I was thinking about other stuff, that I forgot to make sure the hood was P.M.S. :D

Thankfully, my luck seems to be pretty high. We got bypassed. pulled through with no issues, stopped and latched it up.

Another mistake, that could of gone really bad, forgot to check the blindspot mirrors on passenger side. there was this tiny car. Was trying to move over.

Except maybe making that buzzer go off. or riding the white line a tiny bit. heh.

Speaking of work zones.. I live in MO just north of Springfield.. these more eastern zones make me wanna clinch up.

I've gone down Monteagle twice once both ways, A saying I've heard and was taught by my pa.. "Can go slow down to reach your destination a thousand times, but can only go fast once."

Every day I'm improving, and I'll only get better and better, i plan to stick with this when im old and gray currently 28, gonna be an old rookie, ain't ever gonna consider myself experienced.

I know a lot of people suggest against this, but I'm gonna be a leaser, not because of anyone pushin it onto me, But just personal choice. looking at the differences between the two when prime told everyone about it in class.

Though, if I ever do PSD and/or TNT. also aint gonna influence people either way, my life is mine, theirs is theirs.

This has been quite a lot of tapping s phone, a bit too much for me.for any who read, thanks fer reading.

Just a note my posts and updates will be few, I like to lurk personally. I'll update when I pass or fail my cdl, and if I trifecta or not. Seeya out there, drivers. o7

AJF...going against the advice of the experienced...

I know a lot of people suggest against this, but I'm gonna be a leaser, not because of anyone pushin it onto me, But just personal choice. looking at the differences between the two when prime told everyone about it in class.

Leases are written to favor Prime (or any of the TL carriers that do this). You are taking on far more risk and cost then you can ever imagine. Prime makes more profit, while you make less money after paying for everything that they pay for if you are a company driver (can I make this any simpler?)

Considering you have no experience, this is the absolute wrong choice. Give yourself at least a full year and then reconsider it...

Confessions of an Owner Operator

When is the Right Time to Become a Lease Operator?

I also suggest you use the search bar and enter Rainy Prime Lease...it will return a lot of first hand data that you really should read. Rainy (by the way) is a very successful company driver and trainer at Prime. If Lease Operation was a great path to take...every one of the experienced and successful drivers on this forum would have taken that route. NONE of us have...and likely never will.

Don't make this mistake...I promise you will live to regret it.

Is your instructor, your Pa, on a lease with Prime?

But just personal choice. looking at the differences between the two when Prime told everyone about it in class.

First, do you see the obvious problem within your statement? ^^ So "Prime" told you of the differences? Yeah, they're not biased at all...

Second, just what are those differences? 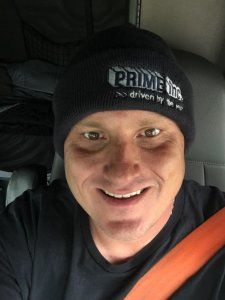 Just my 2 cents for what it is worth. I think lease is just a terrible idea for anyone. Also being a rookie with a fresh cdl knowing nothing about trucking, freight lanes or anything, this is just a recipe for financial disaster. Best of luck.

I have to chime in here as well about the whole lease thing. My middle child drives for Wilson Logistics. The first couple of months driving, all he talked about was lease, lease lease....well most of the time. Since he has been solo, 4 months now, doesn't even come up. Why you ask? Because it doesn't take a genius to figure out how much each break down cost. He has been broke down about a handful of times. Once, close to Virginia (maybe). They has to send 2 two trucks because they were dispatched from a different state and couldn't pull the empty trailer connected to the tractor. He has blown a super single on his drive's. That cost a tire, a wheel and downtime. He has been broke down for a Fuse blowing and melting some surrounding area. There have been a few other maintenance issues, but you get the picture. If you are a lease op, you pay for it all including all normal weekly bills, and if you are like him, a company driver, worse case you get break down pay, and keep on keeping on.