We often talk about why local driving isn't a wise choice for getting our careers underway. I thought I'd share an experience I had today in Rock Island Illinois delivering to a college there. The address for this delivery was 3435 9 1/2 Avenue Rock Island IL 61201. Google maps looked tight but the dang snow piles made it even tighter.

Original plan as I approached from the west (left) on 7th ave was to hook a right onto 34th and get in there. Problem is after I took the entire street to make that turn i noticed on top of the hill tree trimmers had the road blocked. I ended up continuing on 7th and eventually made my way back around and decided to turn down 30th this time and hook a left onto 10th follow it around the curve and get in. Sounds easy enough, right? WRONG!

I ended up needing to readjust a couple times for my tandems to clear a telephone pole on the curve, as the snow banks prevented me from riding against the curb in front of me.

knowing it was going to be real tight i had gotten out prior to getting up on the snowbank to be sure it was soft enough I'd be able to plow through it and there weren't any hidden fire hydrants or other obstructions. i had maybe a foot of room before I'd hit the side of the telephone pole. After a couple stressful moments I'd gotten through that and parked on 34th in front of the school then walked in to confirm I was in the proper place before making my next move, as well as assessing what I was going to do. Yep, right place time for my next turn!

once again I ended up taking out a snowbank after checking for obstructions and getting partially on the sidewalk as much as their snowbank in front of me would allow. I had only 3 pallets on me, so I wasn't concerned about tipping over. If I had more weight or the banks were higher I'm not so sure what I did would be a good idea. 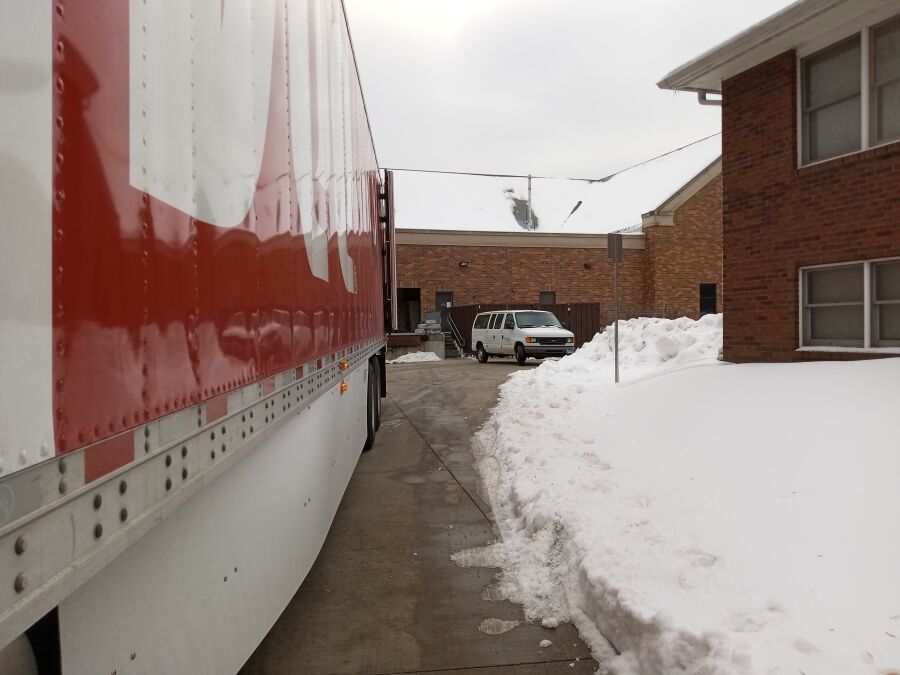 warehouse loaded pallets sideways and they only had a hand jack so I had to downstack 140 cases onto a new pallet so the pallet jack could grab them. The receiver told me the only way out is the same way I came in, but drivers usually come in the way that was blocked today. I couldn't hook a right out because of a hydrant and poles on the corner. I had to swing wide and shimmy my way out to avoid taking out signs. Once again I barely cleared that telephone pole and then it was a nice rest of the day. I had a few more pictures of the way out but for some reason its not allowing me to upload more pics. I was too focused to stop and snap pics thats why most are Google maps. The best part was that line all drivers hear at tight locations. "We get trucks in here all the time." I bet you do, it wouldn't happen to be that 28' PUP that just pulled out would it!?!?!?!?

Honorable mention of a Dollar General store i drove past at 2217 Rockingham Rd, Davenport, IA 52802 there was a pepsi truck in the lot when I drove by.

Maybe middle of the night it'd be alright but while they're open? Oh heck no!

That's why they pay you the BIG bucks, haha!

I'd have had the windows down AND the air conditioner blowing. Situations like that make me sweat. Thanks for explaining your process. Checking for obstructions buried under the snow is great advice!

This is why I was forced to go out the same way I'd came. This is the sign I barely cleared leaving the dock area.

Checking for obstructions buried under the snow is great advice!

I didn't think there would be any due to satellite view but ya never know. The extra couple minutes double checking is far better than a couple hours dealing with an incident report and preventable.

You really wouldn't have liked it having college kids everywhere on foot and in cars watching you, even noticed one girl on the sidewalk recording me. Maybe ill make it on YouTube and they'll label it that a dumb truck driver made a wrong turn, to get more views and subscribers (hahahaha)

You really wouldn't have liked it having college kids everywhere on foot and in cars watching you, even noticed one girl on the sidewalk recording me. Maybe ill make it on YouTube and they'll label it that a dumb truck driver made a wrong turn, to get more views and subscribers (hahahaha.)

I'll have to join the 'Twisted Truckers' group on Facebook after all, then~!!!

You area a brave young man Rob! Thanks for the screenshots! It reminded me of a small private college that I delivered some aluminum seating materials to for a Lacrosse field. As soon as I turned onto the property I started thinking, "OMG, what have I done?" At that point you can't back out though - you are committed. I had already planned on spending the night on the property but it was a snowy night and there really was very little places for me to park my rig. I finally came up with a make-shift parking spot, and settled in to my sleeper when after about an hour my dog started acting like she was about to bite somebody's head off. A security guard or campus police officer was outside my trick wanting to know WTH I was doing parking here on the campus. After explaining to him that I was delivering material for the Lacrosse field, he was overjoyed to see me and said he would make sure nobody else bothered me through the night.

When I woke up in the morning and met the construction superintendent he had me move to an even more ridiculous area to get unloaded. I asked him if he had ever had anybody with a 53 foot trailer get in there and back out, he simply grinned and said, "Some of them have made it and others of them haven't." It was a challenge, but that's what we signed up for isn't it? I love stuff like that! It's all got a certain pucker effect to it, but there's a great feeling of accomplishment after making a delivery like that. You're doing a great job Rob! Keep up the great work!

Pretty sure everything in Rock Island is tight, they sure didn't leave much space in that town when they built it.

Those are a lot of fun, after the fact. 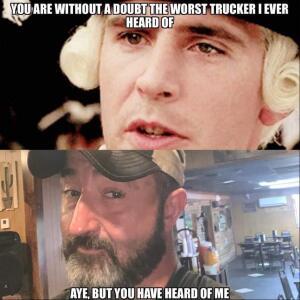 Yeah that looks pretty tight. I hate it when obstacles block my planned route and then I have to think up stuff on the fly. You might as well join me on the dg account 🤣

Pepsi truck at dollar general? Least they got Day cabs and 48’s &smaller. Whole different beast with sleeper and a 53 footer.

Thankfully, the majority of the customers we deliver to have easily accessible warehouses where getting to them isn't an issue. We do have a few though, where it almost takes an act of God to get to and/or getting into their dock. I am glad I don't drive a sleeper rig and having to get into some of these places. Driving a single axle day cab into a few of our customers is an adventure in itself. Google maps and especially Streetview have been a HUGE help to me to preview the areas around a customer and locate their Receiving areas.

Advice For New Truck Drivers Local CDL Drivers Photos Refrigerated Trip Planning Truck Driving Stories
Click on any of the buttons above to view topics with that tag, or you can view a list of all forum tags here.