No shame in not chaining, it is a high risk activity that could prematurely end a driving career should you end up wrecking,

What buisness would you have worked for with knight if had you taken that 250 a day job?

No shame in not chaining, it is a high risk activity that could prematurely end a driving career should you end up wrecking,

What buisness would you have worked for with knight if had you taken that 250 a day job?

Local in Denver. I didnt want to for several reasons, possible that I would have had to chain periodically doing that Im sure. I cant remember the partner name just that I was told its a new partner. It wouldnt have been good for what Im wanting to do in my career and how i like to run for sure.

Are these chains designed for highway driving or only for getting unstuck from a bad spot?

Knight provided me with standard chains to drive on, i go max 25 mph , but i see folks doing 40 sometimes, it is also a chain graveyard over i80 donner after a storm, people throwing off poorly installed chains

IDMtnGal ... aka : Laura, you should post some of your 'secret sauce' articles, also!

Harvey C., share what YOU'VE learned .. for Michael, too!

Thanks.. always & again y'all. Tom's not a great teacher if he isn't in the moment... 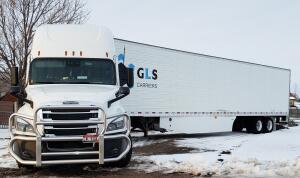 IDMtnGal ... aka : Laura, you should post some of your 'secret sauce' articles, also!

Anne, what "secret sauce" articles??? I'm parked for the night (early), so have time after I walk Monty and make supper.

My brother made seven bean and ham soup today. It sounds like it turned out pretty good.

The primary person a driver communicates with at his/her company. A dispatcher can play many roles, depending on the company's structure. Dispatchers may assign freight, file requests for home time, relay messages between the driver and management, inform customer service of any delays, change appointment times, and report information to the load planners.
Harvey C.'s Comment

Harvey C., share what YOU'VE learned .. for Michael, too!

Anne, Michael's order finally shipped from Amazon 10 days after I placed the order for him so now I will share. I don't know why Amazon has to take 10 days to ship something they show as in stock. I wish I had ordered directly from the company but they didn't answer the phone when I called to see how quickly they get orders shipped out.

Background: About two weeks ago Michael was in a truck stop and his and many other trucks were stuck. His Sleeper berth time wasn't up yet but others had called for a tow truck and so he had the guy pull him out also. I don't know the details, if they had freezing rain or what overnight or if snow had melted, etc. Michael had asked me to look if traction pads were used by drivers in situations like this. I found an old post by G-town who used kitty litter and sometimes de-icer when backing up to a dock with slick conditions. I also saw an old post by Old School who used a lot of de-icer to get out of a yard. Michael was concerned about the added weight of supplies, said he is often too close to weight limit as it is. So I did some searching found found something that appears to work quite well and is easy to use and doesn't take up much room, etc. I had shared this with Anne who shared with Tom who gave his approval and Laura also. I was hoping for these to arrive by today since Michael goes back on the road tomorrow and probably headed back to Utah 2-3 times this week.

Here is the link to the product on the company's web site: Big Gripper

I found one video pretty easy that wasn't too impressive and then I found one pretty poorly recorded video (phone turned sideways half ways through the video), but showed some impressive results with a bobtail truck. Here is the YouTube Video

I'll report back if Michael runs into a situation again where he needs to use the two pairs he has coming.

Bleach, ice melt, and kitty litter would be less than 15 lbs and less than $15.

Bleach, ice melt, and kitty litter would be less than 15 lbs and less than $15.

I don't think Michael's concern about weight is entirely accurate, but I told him where G-town had 100 pounds he kept on board according to this post. The thing that makes this Big Grip seem worthwhile for Michael as this point early in his career is that it has a long range of use (imagine the guy in the video sprinkling kitty litter for 100 or 200 feet?

I'm curious, how does bleach help?

Softens the rubber up on the tires, so it must be used sparingly because it will shorten the life.

I wouldn't worry about the extra weight of gear on the truck. I've carried in excess of 1500 lbs for several years with no problems at the chicken coops.