It's hard to say honestly. If I feared for my life I'd do whatever was needed to protect it. The cargo would be the least of my worries.

We have several trucks that go to the minneapolis area daily. We were instructed when it all started under no circumstances take 35W or I-94. We thankfully do not have stores in Minneapolis or St Paul, only the suburbs. All those trucks have been bumped back to arrive around 8am now rather than 3am as most of the destruction is occurring overnight. I got listening to a police scanner on my phone overnight and holy crap talk about destruction. Post offices, police precincts and atleast 50 other buildings set on fire. Legally, the driver shouldn't be charged for any wrong doing but I'm sure he'll get hit with a wrongful death lawsuit.

I was delivering in St Paul all day Friday; there wasn't much going on but it was probably a calm before the storm type of deal.

If these were intended to be peaceful protests they would not be occuring in the middle of the night and the folks would not be looting. I too would have kept going because you are safer moving in the cab and not getting out. All the while dialing 911.

I know I have a much different outlook on this subject. I was in Los Angles in 1992 during the Rodney King riots and look what happened to Reginald Denny. If the rioters want to get run over by a semi then so be it. Certainly not something I want to do, but it is up to me to protect myself first and foremost.

Of course the news media is going to hype it all up. That is what they do. I run a dash cam for a reason.

I am sure that the driver remembered what happened to Reginald Denny and didn't want the same, or worse to happen to him. He did what he had to do. 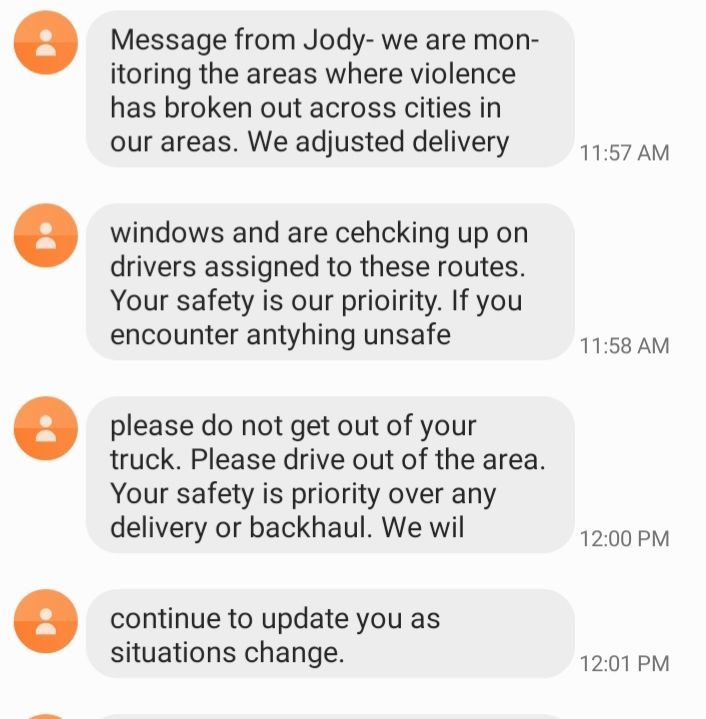 I can almost guarantee that all our employers feel the same way but it's nice to receive a message like that to show they care.

Of course the news media is going to hype it all up. That is what they do. I run a dash cam for a reason.

I can't recall the site I read it, but there was a news story about protesters coming together to help pour milk in a young girls eyes after being pepper sprayed. The story tried to portray the police in a negative light for pepper spraying the area when a minor was there. How about we ask why the heck would you bring a child to protests that are turning very violent!? Seen a couple videos out of minneapolis that got a good laugh. Protesters jumped on a National Guard Humvee. They slowly drove trying to get them to get off. No success so they took off! Person filming claims they were doing 60 mph with the guy on the roof. Another was the Minneapolis police marching with the NG down a residential street and told the residents to get inside about 8 times. They didn't listen so one of the officers says "light em up" and unloaded the paint balls on them hitting a woman in the crotch 😂. The news has portrayed them to be over reacting but clearly its needed at this point.

And this just happened.

They will use any excuse to go out en masse and loot ! They couldn't give 2 nickles for Floyds death pfffft

All I know I think if it was me, I'd have driven aLOT faster out of the area , get in my way Ig'nant people suffer the consequences plain n simple.

Hear woman in video trying to yell to the Fed Ex driver, "Back up" dummy, like that would have been any better !! Ya just can't fix Stoopid !!

Police were dumb as well, redirecting traffic off the highway right into the mix SMFH

“In the final analysis, a riot is the language of the unheard. And what is it that America has failed to hear?”~ Rev. Dr. Martin Luther King Jr. Assassinated Civil Rights leader & non violent activist.

According to the footage, "police said the protester MAY have been trying to break into the truck." But the reporter actual said, at the very beginning, before quoting the police, that he was killed WHILE BREAKING INTO THE TRUCK. That's what yall heard & he's guilty cause he's black.

All I know is that the FedEx driver has essentially lost his driving privileges cause insurance companies will not insure anyone with a fatality on their license. I dont have experience with self insured trucking companies & their policies so I cant speak to that.

Missouri did pass a law saying commercial vehicles can continue driving where protesters/rioters are causing you to fear for your life.

The FedEx driver will be okay. He did what he had to do to protect himself.

That FedEx driver will be alright. I'm shocked the KAG tanker driver stopped. That's a gasoline tanker and can be used as an extremely dangerous weapon. It looks like one of the animals crawled into his first compartment through the top so that tells me he was at least empty.