Money. They get the best deals they can. Also maintenance costs over time and type of freight hauled. CFI has a good deal and relationship with Kenworth. They used to have Freightliners, international and some Volvos. Those are being retired. They said they were looking into getting some other brands, haven't seen a sign of that yet.

It's interesting, because trucking is a commodity business just like the airlines are. The idea is to move freight or people as inexpensively as possible. One of the most efficient and consistently profitable airlines, Southwest, has nothing but Boeing 737's because they said it limits their parts inventory, makes repairs and maintenance more efficient, and makes it much easier to hire and train mechanics.

It would seem on the surface that you would have the same effect if you did that with trucks - just stick with one manufacturer, one engine type, one transmission type throughout your fleet. I'm sure every trucking company has their reasons for their fleets being structured the way they are, but I strongly suspect most of them are simply taking the best deal they can get at the time they're ready to make a major purchase. They probably see the trucks themselves as commodities also. They all do the job well. It's just a matter of finding the best price you can get on a truck that will work well for you. 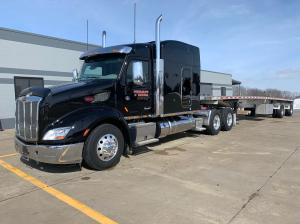 It's all about the trucks

Most of Prime is FL and they have a wide selection of parts in stock. Petes,Volvo, and International need to go to the dealers more often because of it. Lease op friends all want a Volvo but say the parts costs more.

It also comes down to fuel economy. FL are lighter than Petes Volvo and International, so Prime puts most company drivers of full size in FL and the lease ops get the others. they figure the lease ops can pay more for fuel rather than the company. I have friends who leased several FL in the past and now have a Pete. He says he spends 10% more on fuel with the Pete and he is going back to the FL.

However, drivers want what they want when living OTR. I see men in the parking lots arguing over 1 brand new Pete when there are 40 other trucks there. They never drove a Pete and have no idea if they will like it, but almost all the new male drivers i meet want a Pete. Therefore companies wont order trucks that are uncomfortable or difficult to drive. I was told a year ago, Prime was getting away from the Internationals. But then the trans and engine changed, so now Prime is amping up the ordering with another 800 coming in the next couple of.months.

My friend owns a Volvo and she says it drives like a cloud. She never mastered a manual so when her hubby suggested the auto she jumped for it. She swears she will never drive anything but a Volvo again. But, it is heavier therefore she spends more in fuel. I took it out for a quick spin and it feels a lot like my International. However she does pay a lot more in fuel than my boyfriend does for his auto FL.

Weight is another issue. The FL are lighter, even the full size are lighter than the others. that means more freight weight in the trailer and possibly more money for the load. This is also why they get better fuel economy. It is another reason why they are "freight shakers" and so bouncey and rocked by wind. Some shippers get charged a flat rate for a load, whether 1000 pounds or 44k, so using heavier trucks for lightee loads may not cost that much.

Because I dont have to pay for fuel etc, My favorite by far is the 2020 International. The FL seems so flimsy and weak in comparison. Ten mph wind will rock you and they creaked a lot when turning or in wind. The Pete and Internationals felt a lot more solid but can be dangerous in the wond because you dont feel it until its in the 30mph range.

I drove a Pete for a few weeks in training and it was difficult for me. The hood mirrors were so low I couldnt see them and I would pull myself up by the steering wheel to get a peak. The seats were higher too, and even on the lowest setting, i could hardly reach the pedals. Every time I hit a bump, the seat went up and down and my foot went on and off the pedals creating a stop go, stop go effect. The manual shifter was more boxy than the FL which made shifting for a newbie easier. It did have a "blindside" warning sensor which i liked if someone was on your right and you turned your blinker on.

At first when i saw the international i thought it had less cabinets and wasted open space. My under the bunk space is completely taken up by the ThermoKing APU. I am guessing that is a Rigmaster vs TK issue not a truck issue. It has features like power locks that activate when you put it in drive. There seems to be better lighting, and even the mattresses are better for the students. However, after driving it for a few months, I didnt want to turn in my 2017, despite the issue it had. So now i have a new one and Yay! luxury, power, and it actually drives!!! lol

i hope this helps

Solo: how do you like TMC other than just the Pete?

Wow, thanks for all the detailed info that I found very interesting. I watched that TMC YouTube video and was amazed by all the stuff they provide for drivers in their Pete trucks.

I’ve never driven anything but Frightliner, and I’m real happy with it but I don’t have anything to compare it with. Ignorance is bliss (which is why I’m such a happy person). I can only admire the other trucks from outside 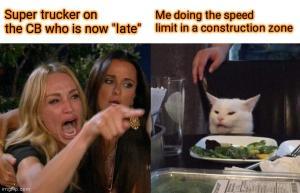 I’ve never driven anything but Frightliner, and I’m real happy with it but I don’t have anything to compare it with. Ignorance is bliss (which is why I’m such a happy person). I can only admire the other trucks from outside

I have driven both Freightliners and Volvo sleeper and day cabs, and currently a 2019 Kenworth day cab , personally I prefer the Freightliners overall.

To me everything in the Volvo felt cheap and its ride was super bouncy, plus the sleeper cabinets sucked compared to the Freightliner I trained in. The Kenworth I have now rides the best out of the 3 but the botton layout and lack of interior space and compartments are annoying.

I forgot to mention that companies also do not like to have all their eggs in one basket in it comes to manufacturers, as each brand has it problems having multiple manufacturers minimizes being affected by any one specific problem.

It's all about the trucks

Automatic Transmissions Life On The Road Truck Equipment Truckers Technology
Click on any of the buttons above to view topics with that tag, or you can view a list of all forum tags here.