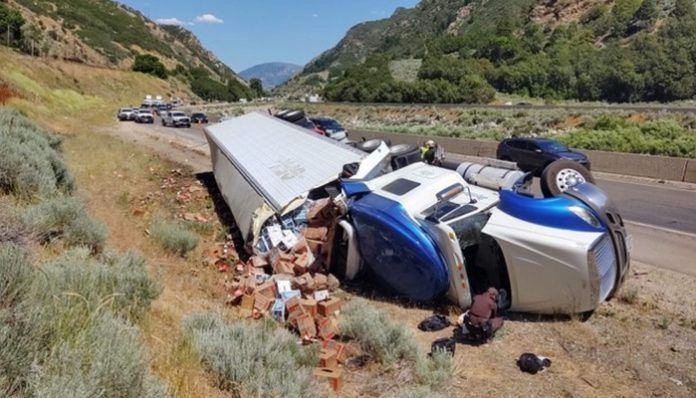 Utah is cleaning up state highways after experiencing eight truck rollover accidents in just two days this week, five of them within a 12-hour stretch on Tuesday alone. Utah officials say that all of the accidents were 100-percent preventable.

"In the case of the detached trailer, UHP reminds drivers of the importance of a pre-trip inspection. And in the case of the dropped cigarette, remember, nothing is more important than your primary responsibility to operate your vehicle, especially in a commercial motor vehicle. After immediately slowing down and stopping on the shoulder of the interstate, one can safely recover a dropped item. All of these incidents were 100-percent preventable!"

Here is a brief rundown of Utah truck rollovers this week:

In the news release UHP said they would like to "remind trucking companies to create safety practices that encourage drivers to avoid feeling like they need to push their semi’s capabilities to its limits in order to meet time constraints on deliveries."

Statistics people like to point out that the age of the average truck driver is inching ever closer to the mid-centenarian point. In fact, latest research shows that the average age for North American drivers is now in the 46-50 years range.

But many drivers in this age group are giving up driving and they are not being replaced by the younger set in their 20s and 30s; which is why the age demographic is slowly inching older, it was stated in a Freight Waves article.

With that in mind, and with the continuing driver shortage, truck designers are now beginning to think more about "inside the cabin" technologies over the traditional engine/drive train design technologies.

Further into the future, innovators are envisioning a time when drivers will be able to sit comfortably, stress-free and rested with their hands off of the steering wheel while autonomous features take the truck safely down the road. This would allow drivers to plan the next load, thus possibly allowing for more freight being hauled over a given period of time.

Freight Waves, addressing this issue in their recent article, concluded:

"It is still too early to tell if we are entering a golden era for truck drivers. However, the heightened efforts to advance the industry in that direction currently involve a wide array of organizations – from OEMs, to system suppliers, to connected vehicle technology providers, legislators, freight brokers and early-stage companies that deal with computing, IT, healthcare and simulation, among others. This is all a clear indication that commercial vehicle product planning will continue to focus squarely on truck drivers for many years to come."

On the heels of President Trump's recent signing of the "No Human Trafficking on Our Roads Act" the Federal Motor Carrier Safety Administration announced this week a rule permanently banning for life any drivers convicted of human trafficking from holding a commercial driver's license.

“This is an important step in the Department-wide campaign to keep America’s roadways, railways, airways, and waterways from being used for human trafficking,” said U.S. Transportation Secretary Elaine L. Chao, in an FMCSA news release.

This new rule revises the list of offenses permanently disqualifying individuals from operating a CMV for which a commercial driver’s license or a commercial learner’s permit is required.

One violation of any of these major offenses in a private passenger vehicle or in a commercial vehicle, according to the FMCSA, will result in revocation of a driver's CDL for one year, or three years if hauling hazardous materials. A second offense results in lifetime revocation.

Offenses resulting in revocation of a CDL:

“The commercial motor vehicle industry is uniquely positioned to help detect and report human trafficking, and thankfully professional drivers’ efforts often bring an end to these tragic situations. Sadly, however, some human trafficking activities are facilitated by the use of commercial trucks or buses,” said FMCSA Administrator Raymond P. Martinez in the report.